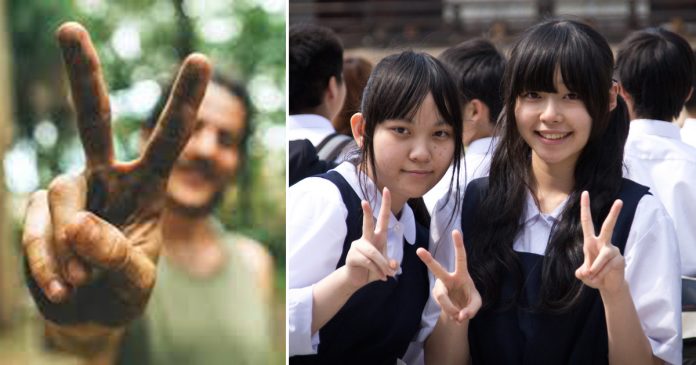 Different countries often have different ways to take pictures but the ever popular V-sign or peace sign never goes out of style with young East Asians predominantly making the sign whenever they take pictures. Ever wondered how did the trend start?

Even though records showed that the V-sign, presented by raising the index and middle fingers to form a ‘V’, started as early as late 1960s, it was not until the 1980s that the trend took off as mainstream.

In 1968, the ‘V’ sign was introduced to the mass when the protagonist of baseball comic Kyojin No Hoshi (Star of The Giants) gains his father’s approval when he throws the sign just before his son enters a big game.

Later on, volleyball manga Sain Wa V! (V Is The Sign) was created and adapted into a television series. The series received massive positive feedback from the audience including its popular theme song that chants “V-I-C-T-O-R-Y!”

Some also say that it was Janet Lynn, an American figure skater who first started the trend. The then 18-year-old skater was expected to bring home a gold medal in the 1972 Olympics in Japan but she fell during her performance, thus crushing her dream into pieces.

However, to everyone’s surprise, Lynn handled her defeat with a smile on her face and soon, she became a media sensation in Japan. Apparently, her behavior charmingly countered the Japanese norm of saving face.

“They could not understand how I could smile knowing that I could not win anything,” she told Time.

While on media tours in Japan, Lynn later habitually threw the ‘V’ sign to which it later became a cultural phenomenon.

Even though Lynn did help introduce the trend to the mass, Japanese media attribute the popularity of the ‘V’ sign to local singer Jun Inoue who performed with his famous band the Spiders.

Inoue who was a celebrity spokesperson for Konica cameras was seen throwing the ‘V’ sign multiple times when he filmed a commercial for the brand.

A few years later in the 1980s when the widespread use of camera began to take place, the Japanese culture ‘kawaii’ which is based on visual cuteness took off. Women started to use the ‘V’ sign to make their face looked smaller according to Jason Karlin, an associate professor at the University of Tokyo.

“The V-sign was (and still is) often recommended as a technique to make girls’ faces appear smaller and cuter,” Karlin told TIME.

The trend continued to be exported to other Asian countries such as China, Hong Kong, Taiwan and South Korea when Japanese pop culture rose in popularity. 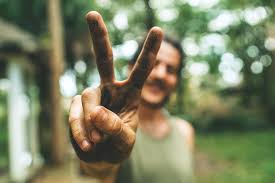 Today, the ‘V’ sign is seen as an obligatory pose whenever Asians take photos. The trend has seeped deep into local cultures that most Asians habitually throw the sign without thinking although some say that they do it to reduce the awkwardness when taking a picture.

“I need something to do with my hands,” says Suhiyuh Seo, a young student from Busan, South Korea.

However it started and for whatever reason the ‘V’ sign became so popular among Asian, it is definitely one of the most frequent poses one does when taking a picture and it’s okay!

Man finds a tunnel which leads to an underground city that...