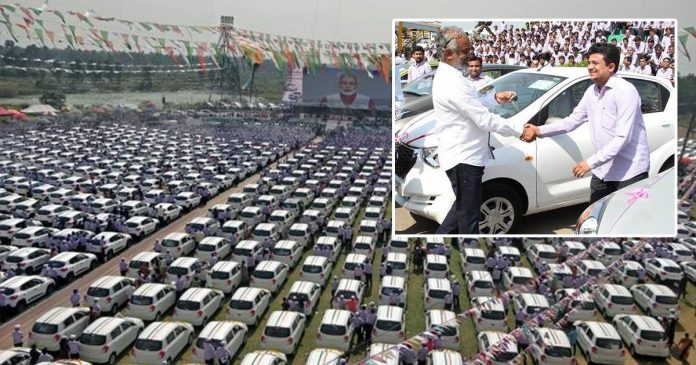 Savji Dholakia is a diamond merchant in Surat, India who is well-known for his generosity to present expensive gifts and rewards to his employees.

This time, the generous merchant once again made headlines around the world for what he gave to his employees for last Diwali — 600 cars worth approximately $20 million.

The brands of the cars include Renault KWID and Maruti Suzuki Celerio which the retail price starts from $6,300.

Dholakia was also reported presenting a thousand more staff gifts in the form of cash deposits and apartments.

All the extravagant gifts were handed out to the employees of Hari Krishna Exporters, the diamond trading company that Dholakia owns in a huge ceremony in Surat, Gujarat.

In a Facebook post that has made rounds on social media, Dholakia wrote that the gifts were a part of the company’s incentive program to reward loyal employees.

“The aim of this program was to reward employees’ loyalty and dedication towards the company,” Dholakia said.

He himself also gifted the car keys to a few employees in New Delhi.

It is a tradition for Indians to give each other gifts during Diwali, a major Hindu festival which celebrates the victory of the good over the evil.

The businessman also became the talk of the town when he presented Mercedes Benz SUVs to three senior staff who completed 25 years of working for the company. The Mercedes Benz SUV is reported to retail at $150,000.