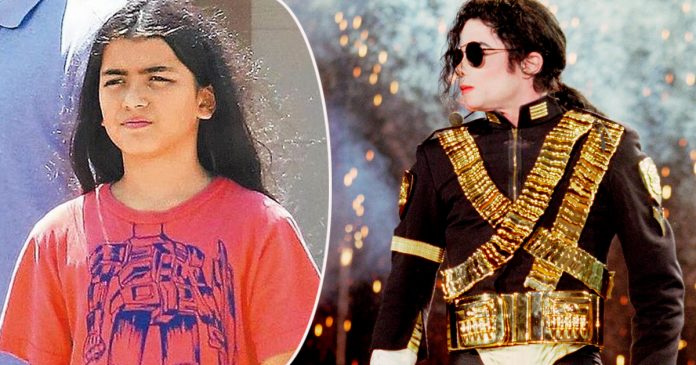 Michael Jackson’s youngest son, Blanket, was spotted in Los Angeles in a rare public appearance since his King of Pop star dad’s shocking death in 2009 aged 50.

The 16-year-old was snapped holding some books from Barnes & Nobles after doing a spot of Christmas shopping in the suburb of Calabasas.

He was seen donning the same long locks he has had since he was a child, and put on a modest display wearing a Spider-Man T-shirt and shorts.

Despite his late father’s multi-million dollar fortune, Blanket could have passed as a regular teen with his dressed down appearance.

The teen was just seven years old when his father passed away from a cardiac arrest in June 2009.

He was described as like his father “in so many was” by his grandad Joe, who passed away last June.

“You remind me most of him [Michael],” Joe wrote on his website about Blanket.

Despite recent events, Blanket has always kept a low profile since he was a child—his dad used to cover him and his siblings’ faces with masks when they went out in public to keep them out of the spotlight.

And ever since then, he has led an extremely private life.

The King of Pop shocked fans worldwide in November 2002 when he dangled his  then 9-month-old son, Blanket, over the balcony of a Berlin hotel to show photographers—an incident he later described as a “terrible mistake.”

“I got caught up in the excitement of the moment. I would never intentionally endanger the lives of my children,” Michael said at the time.

Major Ed Sheeran’s 8-year-old fan was singing his song on a...