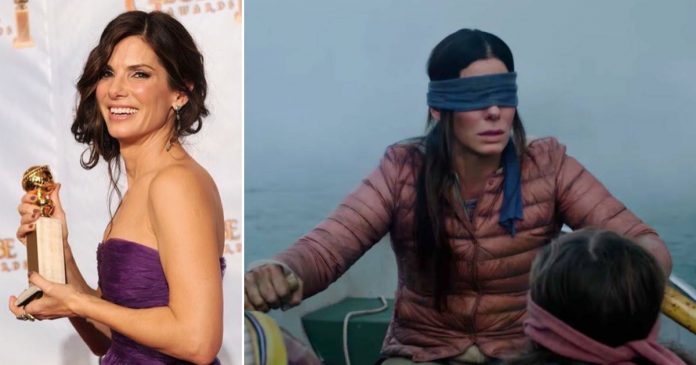 Sandra Bullock’s new Netflix thriller, Bird Box has become a hit and a trending topic on Twitter since it aired on December 21, terrifying thousands of viewers across the globe.

But it turns out young Netflixers have no clue who Sandra is, and this has outraged the internet!

The chilling post-apocalyptic thriller follows a woman, played by Sandra, and two children as they embark blindfolded on a dangerous journey to escape from an evil, mysterious force which makes you want to take your life if you see it.

“The lady from bird box looks like MJ,” one Twitter user wrote with a split image of Michael Jackson and Sandra.

The post prompted scores of outraged Sandra fans to hit back.

It turns out some young Bird Box fans don’t recognize the 54-year-old award-winning actress for her hit movies such as Miss Congeniality, Speed or The Proposal.

Many people retaliated and called the original poster out for their disrespect.

“Sandra Bullock made my childhood fun. I loved “Miss Congeniality” and her goofy laugh. Don’t you dare disrespect this icon,” one user commented.

“That’s our queen Sandra Bullock and no,” another tweeted.

Meanwhile, one wrote in response, “That lady is Sandra Bullock you uncultured swine.”

“Y’all better stop talking s— on ‘that lady from Bird Box’ and learn her name. Sandra Bullock is THE actress from her generation and there is nothing you can say to prove me wrong smh,” another fan wrote in Sandra’s defense.

Sandra has received Hollywood’s top awards throughout her acting career, landing an Academy Award in 2010 for Best Actress for her part in The Blind Side as Leigh Anne Tuohy, as well as a Golden Globe and a Screen Actors Guild Award.