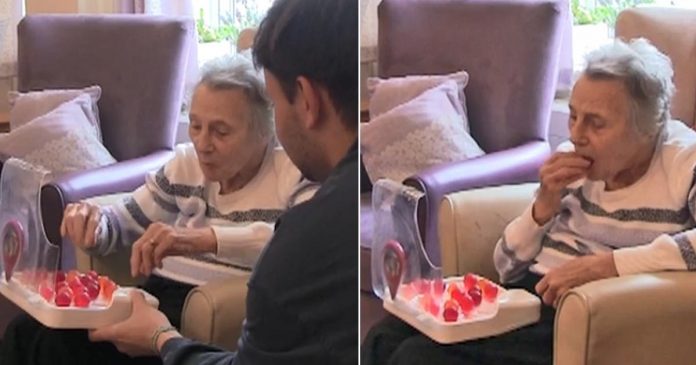 When Lewis Hornby started taking care of his grandmother who is suffering from dementia, he noticed that there were many challenges that he had to face, including making sure his grandmother stays hydrated.

People who suffer from dementia and Alzheimer’s often have memory loss and impaired cognitive ability. Hence, it is a challenge for them to remember the small details in their daily routine such as drinking enough water.

So, when Hornby discovered the issue, he realized that he had to do something which led to him creating bite-sized edible pods which contain water.

The edible pods which are called Jelly Drops is Hornby’s solution to ensure that his grandmother and other people who suffer from dementia and Alzheimer’s to have enough water intake.

According to him, people with dementia often find eating easier than drinking so the tasty and colorful treats will help to stimulate their minds and encourage them to pick them up.

The Jelly Drops come in different colors of red, orange, green and brown that are also engaging for dementia patients.

“For people with dementia, the symptoms of dehydration are often mistakenly attributed to their underlying condition, meaning it can easily go unnoticed until it becomes life-threatening.”

“About a year ago my grandma was unexpectedly rushed to hospital, she was found to be severely dehydrated.”

“Thankfully, after 24 hours on IV fluids she was back to her normal happy self, and is still enjoying a good quality of life to this day,” Hornby writes.

When he first introduced the Jelly Drops to his grandmother, she was able to quickly eat seven Jelly Drops in 10 minutes which is equivalent to a full cup of water

Hornby adds further that it usually takes her hours to do so and needs much more assistance.

The London-based student is currently in a mission to make Jelly Drops available to more care homes.

“I had a fantastic response during my degree show, receiving many offers to trail Jelly Drops in other care homes, most notably from the BBC World Service who are making a program focusing on tools designed for people with dementia,” he writes.