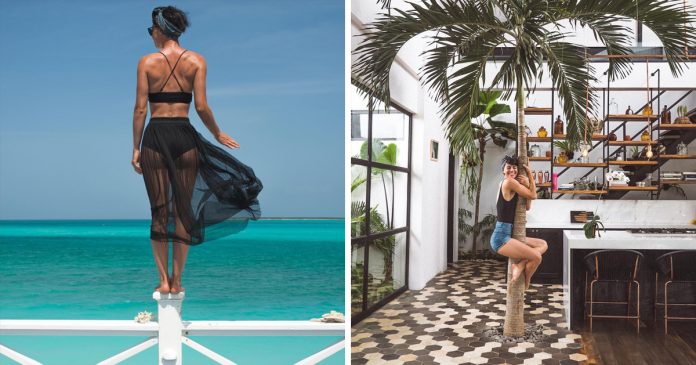 Can you imagine travelling to exotic locations around the world and get paid for it? What seems a far-fetched dream to most people is actually a real job to this lucky lady.

Videographer Sorelle Amore is living the life that many people can only afford to imagine. Her daily job which mainly includes travelling to various locations worldwide may seem too good to be true that she even won the Third Home’s “Best Job On The Planet” contest.

In 2017, Amore beat 17,000 other social media influencers to win the contest which allowed her to travel for free!

Some of the breathtaking locations that she has the privilege to visit were Costa Rica, Scotland, the Bahamas, and the Dominican Republic among many others.

Other than having the chance to visit many countries, she is also paid for travelling to the locations.

Thanks to her winning the Third Home contest, she gets to travel, write, take photos and videos among other perks such as staying in multi-million dollar homes and all expenses paid.

How lucky she is to get to wake up with such view every morning!

Even though it is only for three months, there is no doubt this is the best of time of her life.

Luckily for us, Amore also shares some of her astonishing photos of her travel trip on Instagram.

Rare aerial views of ancient castles, luxury stays at various mansions, and also the beauty of the cities she visited are some of what she shares on her Instagram.

Feeling envious yet? What do you think of her job?

Mother’s Love Is The Greatest! A Crippled Mother Dog Limps Around...