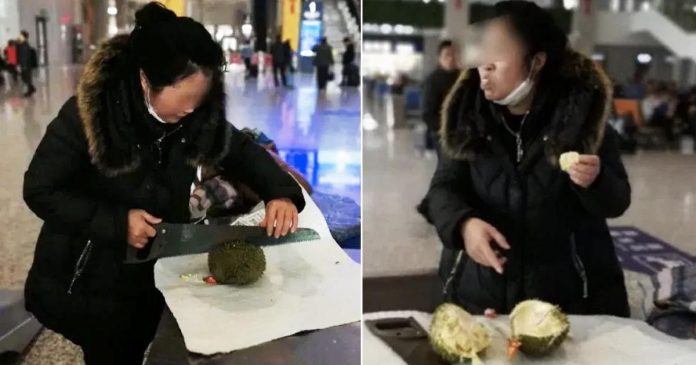 Many people cannot stand the pungent smell of durian and even when its husk is intact, it still can be quite potent and stench that many public places and transport ban the fruit.

However, for durian lovers, the taste of its flesh cannot be compared to any fruits in that its both creamy and sweet. So, when this lady was told that she could not bring durian inside a train station, she made something that surprised everyone.

A woman in China went viral on the social media after she sliced up and ate the entire durian in under ten minutes!

It happened after the security staff barred her from entering the train station in the Zhejiang city, Quzhou when they noticed that she brought a durian along with her bag.

Decided not to miss the deliciousness of the spiky fruit, the woman expertly cut it in half with a saw and ate the entire fruit.

She managed to cut and eat the durian in less than ten minutes and even managed to catch her train just in time.

Impressed onlookers who watched the incident recorded the woman and later posted the video of her on Chinese social media. The video later made multiple rounds on the internet.

The incident which occurred on December 29, 2018 may look excessive but it was certainly not the first time for such incident to happen in China.

A similar incident was reported to take place in 2016 in Anhui province at a railway station where a woman ate 5 kilograms of durian flesh before boarding.

Another incident also saw a woman finished two durians at a railway station in Sichuan.

Watch the full video of the woman cutting and eating the entire durian here.