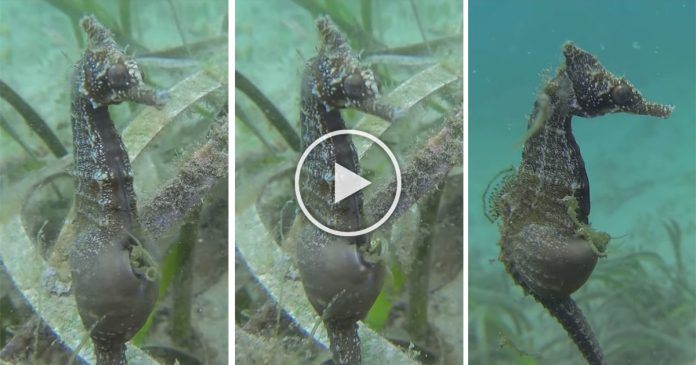 In nearly all animal species, females are tasked with the responsibility of childbearing where they carry their offspring until its time to birth them. With this being said, there is a handful of species’ where the males perform this function including pipefish, leafy seadragons, and seahorses.

Male seahorses are equipped with special pouches where they will carry their offspring until they are fully developed. Female seahorses can deposit up to 1,500 eggs into these pouches during mating season. The eggs are carried by the males anywhere from 9 to 45 days before emerging from the pouch as tiny seahorse babies.

A pair of divers who were carrying out research on seahorses were lucky enough to capture rare footage of one heavily pregnant male giving birth in the wild.

Meagan Abele and Clayton Manning were researching seahorses in the waters of Port Stephens, Australia when they came across a male seahorse in the process of birthing tiny seahorses. Although videos of this sort are common, none have been captured in the wild.

The divers stumbled upon this male during their fourth dive and happen to be in the right place at the right time to see newborn seahorses emerge from the male’s brood pouch.

Clayton wrote about the experience saying, “It’s pretty cool to be a part of something so rare, so when Meagan (my research assistant who took the footage) and I stopped filming, we high-fived and went to the surface. We were positively beaming; not because we’d captured the birth, but because we’d seen it with our very eyes.”

Watch the incredible video below: