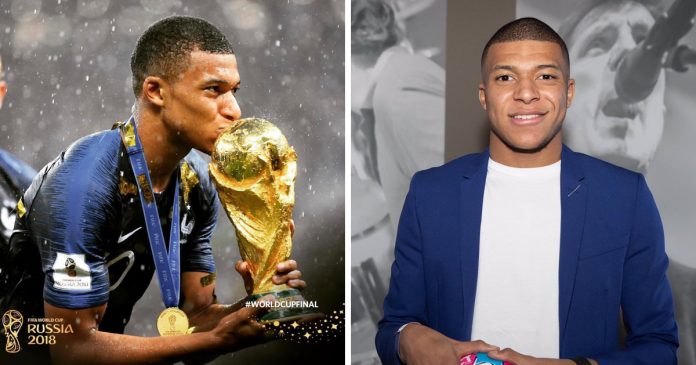 Paris Saint-Germain’s French forward Kylian Mbappe made headlines across the globe when he won the young Fifa Young Player Award at the 2018 World Cup.

He was one of the key players for France’s national team who helped France to emerge as world champion at the World Cup after defeating Croatia with a score 4-2 in the final.

The 20-year-old promising football player was reportedly earned around $500,000 for his performances which he received $22,500 for each France’s seven World Cup matches and $350,000 for the bonus.

However, he did not have any plans to keep a single penny from the huge paycheck as he donated all of it to Premiers de Cordée, a charity organization that provides sports activities to disabled and hospitalized children.

Mbappe who makes around $1.8 million per month rose to fame when he became the first teenage player to score in a World Cup Final since Brazilian legend Pele in 1958 Final when he was only 17 years old.

Like many of his teammates, Mbappe comes from an immigrant family. His father came from Cameroon while his mother was from Algeria. It was his father who works as a football coach sparked the interest in his son.

He always brought Mbappe to practice session when he was very young. Later, Mbappe quickly outperformed other kids in the football club.

By the time he turned 14, Mbappe has already become a professional football player where he played for top-tier Monaco in Ligue 1.

He successfully led the club to win their first Ligue 1 title in 17 years.

The fact that he grew up in one of France’s poorest neighborhoods gives hope to many young children in France. “It makes me proud because he comes from the suburbs like me,” Yanis Jean, 14, told Al Jazeera. “I want to be like him one day.”

Despite being born in an underprivileged community, Mbappe continuously thrives to become one of the country’s most valuable players.

However, the young player said that he still had a long way to go and that the past years were only the beginning.

“I have a story to write, this is just the beginning. I intend to go even further,” he said.