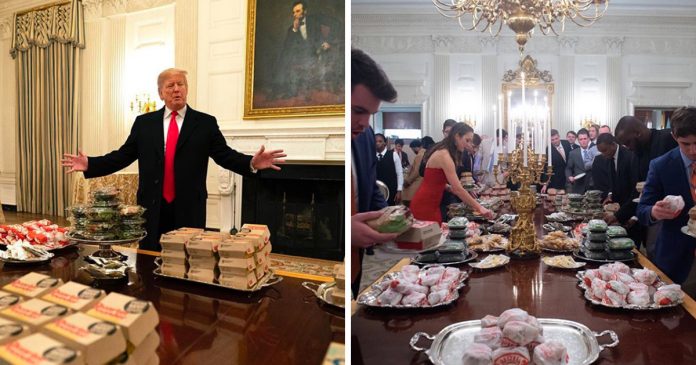 US President Donald Trump served a cold fast-food feast on silver platters to a College football team at the White House this week.

Clemson University’s football team joined the President on Thursday for a celebratory dinner after their win over Alabama in the College Football Playoff National Championship.

But they were greeted with silver platters of McDonald’s, Wendy’s and Burger King, which Trump said he thought athletes would like.

The President even pointed out that he paid for the feast of “lots of hamburgers” and “lots of pizza” himself, because of the ongoing US government shut down.

“We have pizzas, we have 300 hamburgers, many, many french fries, all of our favorite foods.

“I like it all. I like it all. It’s all good stuff, great American food. And it’s going to be very interesting to see at the end of this evening how many are left,” Trump told reporters.

And the Twitter response to the ordeal is absolutely hilarious.

“Clemson boys beat the greatest college coach ever in the natty for the 2nd time in 4 years and yalls president got em eating filet’o fish by candlelight,” one person tweeted.

While another said, “Them kids put on three-piece suits and got on a plane for a junior bacon cheeseburger.”

Just when you think you’ve seen it all, @ClemsonFB you guys deserve better you are world champs and this is the honor you receive from our nations leader!? This is disrespectful on so many levels, just a huge slap in the face after that kind of performance! SMH! pic.twitter.com/rEprhVZf6n

Some have said the meal is the most American thing you’ll ever see, ever.

It’s the fast-food feast of dreams.

At least nobody will have to do the dishes…

French baker fined US$3,688 for working too hard after he refused...