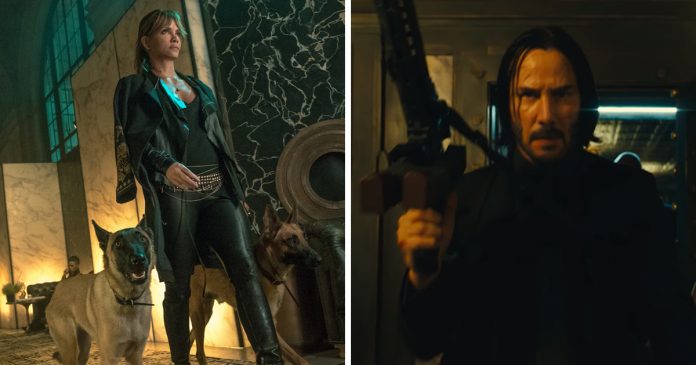 The trailer for John Wick: Chapter 3 – Parabellum is finally out and we’re so excited that Keanu Reeves is back!

Lionsgate Movies released the official trailer today which shows Keanu running through the hustle and bustle of New York and through Times Square with his dog.

The latest installment of the action-packed thriller series picks up where John Wicks 2 left off—John Wick is now ex-communicated from his secret assassin organization and is being hunted by a bounty.

A voiceover says ominously, “There’s no escape for you. The High Table wants your life.”

He has a $14 million price tag on his head, so his mission is to kill his enemies before they kill him.

He’s even pictured making his way around the city on a horse. We never knew we needed a scene like that in our lives before, but now we’re thankful.

If the last two films are anything to go by, we’re definitely in for a treat.

Award-winning actress Halle Berry will be joining the third film this time around, as another assassin and John’s close friend named Sofia, who works side by side with him to keep him out of harm’s way.

“She has a past with John. I end up going to find her to see if she can help me,” Keanu told Entertainment Weekly about Halle’s role in the movie.

Keanu is as hyped about the film’s release as we are!

“The third chapter is literally connected to 2 and starts with John Wick on the run. It goes crazy from there,” he added.

John Wick: Chapter 3 – Parabellum will be released in cinemas on May 17, 2019. Prepare yourselves!