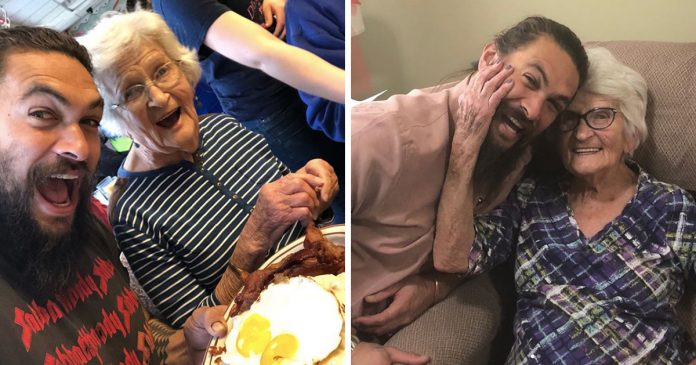 Aquaman star Jason Momoa melted the hearts of thousands of fans around the globe when he uploaded sweet images of him with his grandma this month on a trip back to Hawaii.

He may appear to have a tough exterior, but in reality he’s a total softie, and values family above everything else!

The 39-year-old took a trip back to his home in Iowa state, Hawaii to spend quality time with his number one fan, his grandma.

He uploaded a heartwarming photo of the two of them side by side on Instagram accompanied by an adorable caption.

“Needed to come home to Iowa and give my grams some aloha Love u forever grandma,” Jason wrote.

Look at their smiles. Our hearts!

They’re so happy to be reunited after Jason’s hectic Hollywood filming schedule!

He also filmed his recent visit home for his YouTube channel, and their loving relationship is clear through the footage.

When he first sees her, he says “Grandma, oh my goodness,” while leaning down to kiss her on the cheek.

They then get playful as Jason gets in her wheelchair and follows her, joking, “I’m coming to get you grams.”

“You better stay back there!” She laughed back.

They then sit by the window to look at the sunshine together.

He’s so happy to be by her side! “It’s perfect,” he smiles, while leaning his head against her.

The look of pure love.

Recently, he also uploaded a screenshot of them on FaceTime while Jason was dressed as Aquaman himself!

A spot of breakfast with the woman who helped raise him.

“It’s crazy because you go from Hawaii—this is where I was raised, these cornfields—this is part of America, and it feels like home to me. Well it is home.

It’s so sweet to see Jason has stayed humble and true to his roots!