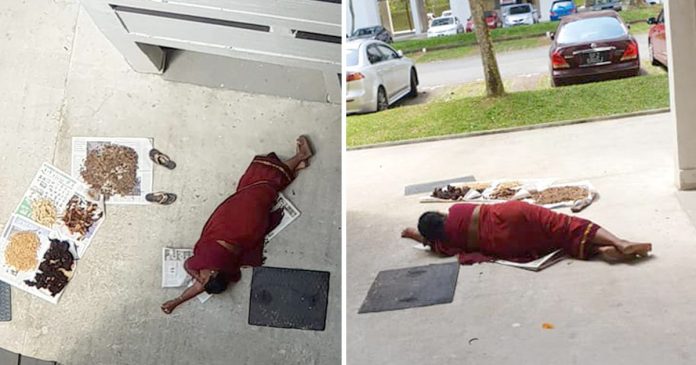 A man went into a huge shock after he thought a woman had jumped out of her apartment when he found her lying on the ground in Singapore.

Photos of the woman lying on the ground of an apartment were posted by user Boy Zam on Facebook last Saturday on January 12. The photos show the woman who wears a red saree lying beside a few pieces of newspapers.

The photos also show several types of spices laid on the newspapers in front of the woman.

In his post, Boy Zam wrote, “Wow I thought aunty committed suicide until I saw her drying her stuff.”

Apparently, the woman was just taking a nap while waiting for her spices to dry. According to Boy Zam, the lady might be lying next to her spices to avoid cats or birds from pecking at the spices.

The post later instantly made rounds on social media as many people expressed their relief over the misunderstanding.

However, other users found it offensive and requested for the post to be taken down as it disrespects the Indian culture.

Some comments wrote that drying spices under the hot sun symbolizes the huge effort and love that mothers show to their children.

Instead of buying store-bought spices, some Indians choose to put much care and effort to dry spices by themselves.

While the incident may come off as hilarious to some, let’s take this as an opportunity to learn about other cultures and not to jump into conclusion without asking for clarification first!