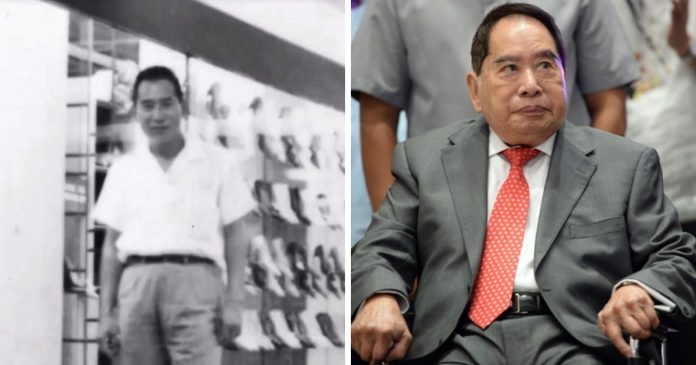 This hardworking man from Xiamen rose from being a penniless Chinese immigrant to leading a multi-billion dollar business empire as he made his fortune with a Philippine shopping center by putting up some of the largest malls in the world.

“Henry Sy passed away peacefully in his sleep early Saturday morning. There are no further details at the moment,” said his SM group in a statement to AFP.

Sy used to work in his immigrant father’s variety store that was later destroyed during the World War II. His father then returned to China but Sy decided to stay in the Philippines.

“Our store was so small it had no back or second floor, we just slept on the counter late at night after the store was closed,” told the late Sy to Philippine Star newspaper in 2006.

Sy inside the original ShoeMart store in Manila.

Sy got a commerce degree from a Manila university and started selling shoes in a shop which would later grow into a chain named ‘ShoeMart’.

He put up his first shoe store in downtown Manila in 1956.

The window display of ShoeMart Carriedo which was opened in the late 1950s.

By 1972, his shops had branched out into selling all manners of goods, prompting the name to be changed to SM Department Store. In 1985, Sy made history when he opened his first ‘Supermall’ in Manila. Sy’s mammoth malls that include dozens of stores, numerous cinemas, restaurants, banks, and many more attractions popped up across the country.

Some even have ice skating rinks—something rare in a tropical country!

With a net worth of USD19 billion according to Forbes, Sy’s holdings include banks, hotels and real estate in the Philippines-as well as shopping centers in China.

By 2018, Sy’s company had 70 malls in the Philippines, seven malls in China, six hotels and eight office buildings.

May you rest in peace, Sy.