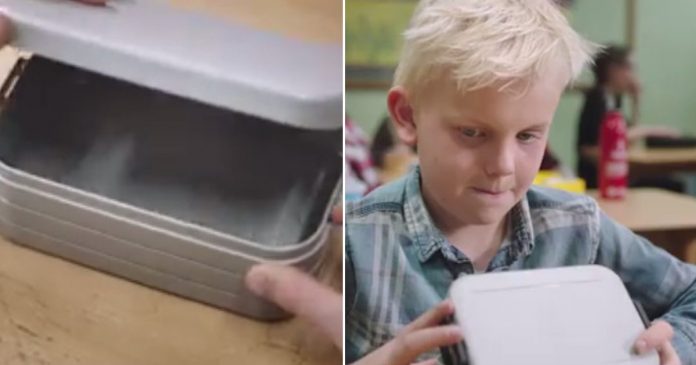 The video begins with a typical scene of a classroom where students take out their lunch box and enjoy their food during a lunch break.

One blonde-haired student takes out his lunch box and put it on his desk.

However, to his disappointment, the lunch box appears to be empty.

The boy later looks around the classroom, only to find his classmates chowing down on sandwiches and snacks.

Feeling embarrassed, the boy asks for permission to leave the classroom to take a sip at the water cooler located down the hallway. The video continues with the boy walking around the water cooler with heavy steps and staring out the window.

A moment later, the boy returns to his desk and takes the lunch box to put it in his bag.

However, he notices that his lunch box seems heavier than it was before so he opens it.

To his surprise, his empty lunch box is now filled with grapes, sandwiches and carrot sticks.

As the boy looks around the classroom, his classmates look over and smile. Apparently, they collectively contribute some snacks for the hungry boy to eat for lunch.

It may seem simple but it is enough to say that his classmates’ thoughtful and kind act has brought a smile to the boy.

This viral video was originally a Norwegian ad posted by The Norwegian Directorate for Children, Youth and Family Affairs to encourage people to foster children.

However, the video has sparked online conversations worldwide about students going hungry at schools. Parents and teachers from all over the world have weighed in, with many revealing they often see or hear of their own kids or other students sharing their lunches with a classmate who has nothing to eat, just as the ad depicts.