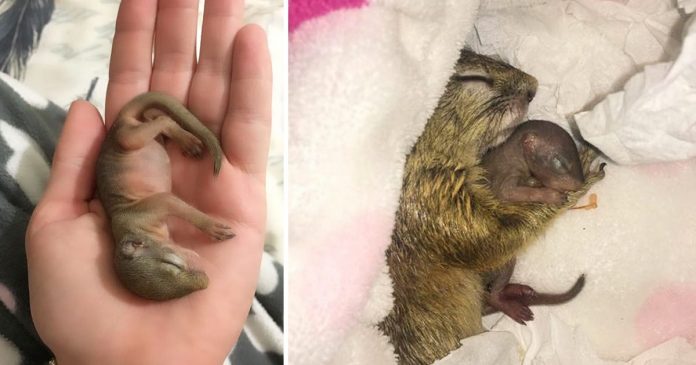 In October 2016, Simone Serfontein of South Africa rescued a squirrel who fell into the yard from a tree.

When she found the squirrel on the ground, the tiny animal cried for her mother but no squirrels ever came.

“We honestly did not think that this tiny thing would make it, but we needed to try and help this baby,” Serfontein told The Dodo.

Nevertheless, Serfontein took the squirrel in and adopted her as a pet. Little did she know that there would be many feedings and extensive care in the following days.

“I did not really know anything about raising a baby squirrel and had to do a lot of research,” Serfontein said.

“I never knew that raising a squirrel could be this hard,” she added.

The squirrel which she later named Dingetjie quickly put on weight and regained its health.

According to Serfontein, she made a shoebox for Dingetjie to sleep in but the adorable squirrel preferred to snuggle up next to her in bed.

Dingetjie’s presence had brought so much joy to Serfontein but she knew that Dingetjie belonged to the wild where the squirrel would better off. Later, she released Dingetjie to the wild.

“We always knew that the day would come for us to release her and say goodbye,” she said.

In spite of that, Dingetjie never failed to keep coming to visit Serfontein. The squirrel would always pay a visit to the woman every now and then. ”

“We eventually started to leave the window open for her during the day while working so she can come and go as she wants.”

A few months later, Serfontein realised that Dingetjie might be pregnant as she seemed to be putting a lot of weight, especially around her belly.

Her prediction came true when Dingetjie gave birth to her first baby later on.

Unfortunately, it was a stillbirth.

Nevertheless, just over a year later, Dingetjie went into labor for the second time.

Luckily, this time, she gave birth to a healthy female baby squirrel! Dingetjie even let Serfontein assist her with the baby and hold it.

“There is so much trust,” Serfontein said. “She allows us to look, touch and hold her baby.”

What moves her heart, even more, is the fact that Dingetjie let her in like a family member. Even though she lives in the wild, Dingetjie thought that Serfontein’s house is the safest place for her and her baby.

“We never thought she would stay with us,” Serfontein said. “But she chose to.”

“It’s honestly the most incredible thing I have ever experienced.”