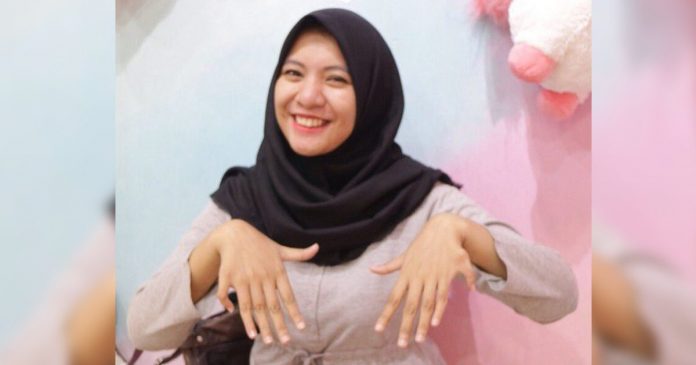 At first glance, Dhiva Caezara may look like any other young ladies but wait until you pay close attention to her fingers and toes.

Caezara who is better known as Zara was born with a unique condition called Polydactyly which caused her to have extra fingers and toes.

The young lady who came from Semarang, Central Java province in Indonesia became a viral sensation on social media after she posted photos of her extra fingers and toes on Twitter

so many people asking if my fingers were edited or not and then demanding the clear photos of my fingers and toes, so here they are, 12 fingers and 12 toes of mine ✨ pic.twitter.com/Jw1m3zlEIq

In the post, Zara offered her explanation behind the unique condition after getting many questions regarding her extra fingers and toes.

“So many people asking if my fingers were edited or not and then demanding the clear photos of my fingers and toes, so here they are, 12 fingers and 12 toes of mine,” she wrote.

According to Zara, all of her fingers and toes including the extras are fully-functioning and working fine.

The extra fingers and toes also grow their own nail, tissues, bones, and joints.

Her parents once thought of removing her extra fingers and toes when she was an infant.

Zara further added that she was bullied when she was child due to her anomaly.

Nevertheless, the lady never thought that her extra fingers and toes are something to be embarrassed about.

“Well people, having less or more physical appearance doesn’t define your quality. Please be loud and proud for every good in you okay?” she wrote in her post.

Her post later quickly became viral on social media as many users applauded her effort to encourage everyone to embrace their beauty.

Some users also admired her for shedding the light on the condition and bring positive energy on social media.

The condition is surprisingly quite common as it is among the most common congenital limb anomalies, with an estimation of 1 in every 2,000-3,000 live births

Polydactyly is often not life-threatening but it can occur as a symptom of a more serious genetic condition.

5yo girl borned without arms and leg proves that nothing can...