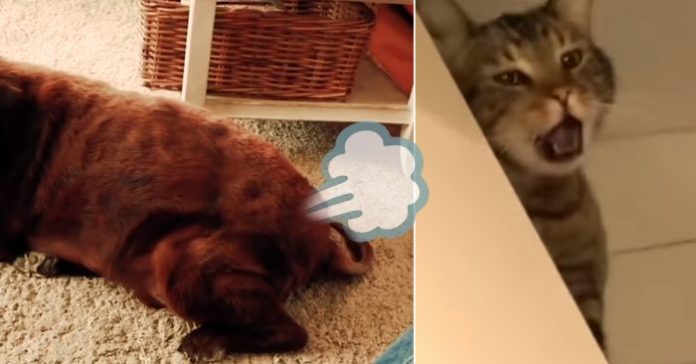 Although farting is a natural and common behavior among humans, it can sometimes get out of hand and released involuntarily. Naturally, any person would be embarrassed if something like that happens. Animals on the other hand, just fart away! Just like this dog caught on video by his owner but it was his cat that suffered from it.

He’s got a dog and a cat in his house. The large, shaggy brown dog just had his meal and relaxing on his owner’s carpet. The owner has already sensed something big is coming and waited, focusing his camera on his dog.

Look at his face, he doesn’t give a clue about what’s going to happen next.

After a few seconds, his dog suddenly lets out a huge fart with the most relaxed and contented expression on his face. It was loud and lasted extremely long! The owner couldn’t hold in his laugh and said, “What are you doing?”

This face expression was what started it.

He pans out his camera and focused his attention on his cat. It’s obvious from the very start that his cat was shocked by the smell and gags on it. His cat’s facial expression turns sour! Without warning, his cat immediately released a fountain of puke, soiling the carpet and floors!

Nope, couldn’t hold it in anymore! Out goes the puke!

The poor cat is disgusted. Their owner couldn’t keep himself in check anymore and laughed his heart out. Who could blame him? That was extremely hilarious!

A dog who couldn’t keep his stinking fart in and a cat with a strong gag reflex. Pets are such entertaining creatures. Check out the video below for a good laugh.

Somebody has to give this dog an Oscar Award for his...