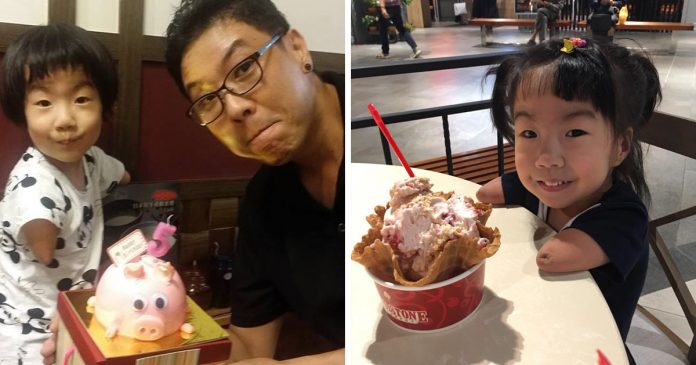 This little girl may not have limbs like most people but that does not stop her from being content with her life.

The 5-year-old girl from Kaohsiung, Taiwan was born with no arms and right leg, leaving her with only one leg to move around.

In spite of her condition, the little girl always has a big smile on her face and never fails to bring joy to the people around her!

According to Apple Daily, the parents of the little girl never expected for her to be born with only one leg. The pregnancy was smooth and the doctor did not find any problems during all the compulsory ultrasound checks.

Nevertheless, they only found out about the girl’s abnormalities after she was borned. They also discovered that she had congenital heart disease.

“This little girl will have a hard time growing up. Are you prepared for it?” the doctor asked the parents.

It was definitely difficult for her parents but they later decided to not give up for the sake of their little daughter. The girl later had to stay in the hospital for two months for further treatments but that was only the beginning.

When she was only 2 years old, the girl had to quickly adapt to a new prosthetic leg which weighed about a kilogram.

Learning to walk with a prosthetic leg proved to be a real challenge for her.

Thankfully, the little girl managed to get used to her new leg thanks to her optimistic and positive attitude.

Her challenges continued when she entered kindergarten where other children often came up to her to ask about her missing arms and prosthetic leg.

Nevertheless, instead of crying, the little girl carefully explained to her classmates and played with them during the break.

She may be only five years old but she never thought of her disabilities as a disadvantage that will stop her from enjoying her life. What an inspiring little girl!