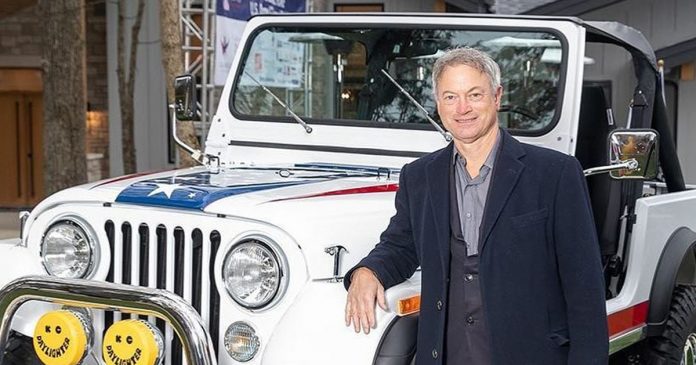 Hitting the news most recently, was Gary Sinise’ effort to raise a staggering $1.3 million dollars by auctioning off his vintage Jeep. And yes, true to charitable form, the money went straight to first responders and military veterans.

With Gary’s reputation for sterling work in supporting veterans, it turned out that a lot of veterans were in the audience. He met, talked and offered his personal thanks to them.

This Jeep will go across the auction block today at Barrett-Jackson, 100% of the proceeds will go to the Gary Sinise Foundation!

But Gary’s Jeep was no new model; it was a vintage labor of love, customized by Richard Rawlings’s Gas Monkey Garage in Dallas, Texas, and emblazoned with patriotic stars and stripes.

This 1981 @Jeep CJ7 is a custom @GasMonkeyGarage build completed for a future episode of Discovery Channel’s @FastNLoudTV. With award-winning actor @GarySinise on the block, it will be auctioned with 100% of the hammer price going to the @GarySiniseFoundhttps://t.co/OSbuW2LH6L pic.twitter.com/IZVXJcvfP1

Bidders did not disappoint. Whether their enthusiasm was for the stunning custom work or for the star status of the Jeep’s previous owner, the car sold easily at auction for an awesome $200,000.

This sum was generously subsidized by Sunbelt Rentals, who fronted an additional $1 million to add to Gary’s final generous donation.

Check out those details repping the @GarySiniseFound!

The chassis has been painted with all fuel and brake lines custom-built to accommodate the 4” lift package.

The @GarySiniseFound logo on the rear quarter-panels and challenge coins on the lower front fenders and center dash. pic.twitter.com/9j2ebO9HII

The winning bidder then sent the Jeep back into the arena for a second run, and the second sale raised another $100,000. As if a grand total of $1.3 million wasn’t enough, Gary added the offer of a private dinner and a chaperoned visit to the Gary Sinise Foundation in California to the winning bidder.

SOLD and SOLD AGAIN plus extra donations for a grand total of $1,310,000! With award-winning actor @GarySinise and @RRRawlings of @GasMonkeyGarage on bidders, a cool custom '81 @Jeep CJ7 just went to its new home knowing it will be helping veterans through the @GarySiniseFound. pic.twitter.com/xI5lWilxXR

Gary was elated at the outcome of the auction: “[It’s] my first car auction,” he told the Arizona Republic, “it’s going to be hard to top that.”

Gary Sinise on stage as the Monkey Garage build 1981 Jeep CJ7 Custom sells twice for a total of $310,000 + a separate donation of $1,000,000 was added. All proceeds going to the Gary Sinise Veteran Foundation. pic.twitter.com/U73femMCWX

Gary’s profound appreciation for the sacrifices made by U.S. service men and women knows no bounds. We salute you, Gary! Your dedication is inspiring.

Gary Sinise has written a book, “Grateful American,” chronicling his personal journey, to be released on Feb. 12, 2019.

Korean man beats Vietnamese wife for 3 hours in front of...