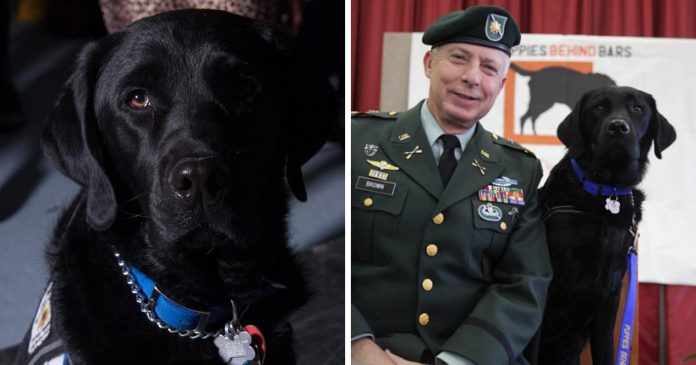 Major Diggs Brown served in the army for 30 years, including a tour in Afghanistan. Suffering from post-traumatic stress disorder (PTSD) as he returns home, he now relies on a service dog named Arthur.

Arthur helps him through days and nights, and accompanies him everywhere—which the Americans with Disabilities Act (or ADA) allows with very few exceptions. Service dogs are different from therapy animals. All service animals are dogs and allowed to accompany their owners into restaurants if they are suitably identified.

Service dogs must go through rigorous training to ensure they know how to behave in public.

“He does a lot of things. He wakes me up from nightmares when I have them. When I have anxiety attacks, he calms me down. He saved my life and I’m even off the drugs,” said Brown about his service dog, Arthur.

Brown and his service dog, Arthur.

When Brown visited Chicago back in 2015, this Colorado resident decided to have breakfast at a French bistro called Cochon Volant before his trip back home. As soon as he was seated, Brown was approached by a hostess telling him that he couldn’t have a dog in the restaurant—clearly unaware of the law.

Brown wanted to have breakfast at a French Bistro before his trip home.

Brown informed her that it was legal for him to bring Arthur to the restaurant and proceed to order his breakfast. However, the woman came again and demanded him to leave before his breakfast arrived.

“This is my service dog, he can go whenever I go, it’s the law,” Brown calmly told the hostess.

Unfortunately, her response was disappointing.

“I don’t care, you need to leave, we don’t have dogs in the restaurant,” replied the hostess.

Not to make things worst, Brown left the restaurant and caught his flight back to Fort Collins, Colorado. But the incident stuck with him—he didn’t want other service dog owners to experience what he encountered. So he took the incident to his Facebook with the intention to educate the public.

“When I got home, I posted to my Facebook page, this is what happened to me and it went viral. Guess this would be a case of ‘No thanks for your service’.”

As Brown’s post spread online, the restaurant owners responded and promise to train their staff better.

The restaurant also made a donation to Puppies Behind Bars, where Arthur was trained.

“The Cochon Volant family is both saddened and disappointed to hear this account of a veteran’s experience. The circumstance was not a true representation of our company policy and we have begun immediate internal review of the protocol, training of staff and ADA regulations to ensure this will never happen again.”

Brown holds no hard feelings against the hostess who asked him to leave and had no intention to damage the restaurant’s reputation but just wanted to make people aware that they have violated the law that not only affects veterans with dogs, but also other people with disabilities with service laws.

We hope a lot more people will be aware of this in the future.