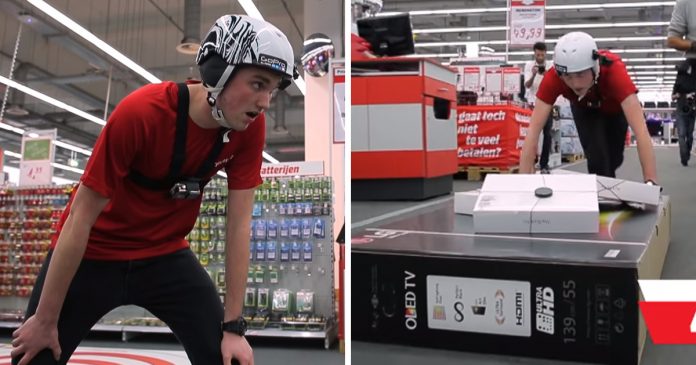 Imagine you can take everything you want from the shop for free in just 100 seconds, what would you take?

A store called Media Markt hosted an event where the participant was given only 100 seconds to take everything they wanted from the premise. But there’s one condition—you can’t use the shopping cart!

In this amazing 2 minutes video shared by the store’s Youtube channel, a man called Kreeg Wannes made a practical tactic to be able to take everything he wanted and came out as the winner of the event.

When other people might be thinking that moving fast is the winning key for this kind of competition, Wannes’ trick was cleverly planned too.

As the competition started, Wannes went straight to his destination and chose a television set.

He laid the TV box on the floor and push it to the designated line. He suddenly stopped at some point and went to take a few more electrical appliances including laptops and handphones.

He put them on the TV box and continue pushing the box.

In the last few seconds, he took a few things from the nearest shelves and throw them inside the designated line.

When it ended, this smart son happily gave his cheering mother a hug.

Look at his brilliant and well-thought-out process in this video:

Toddler dials 9-1-1 for an ‘emergency’—when officer learns the reason, she...

Try this brain test to find out if you are a...