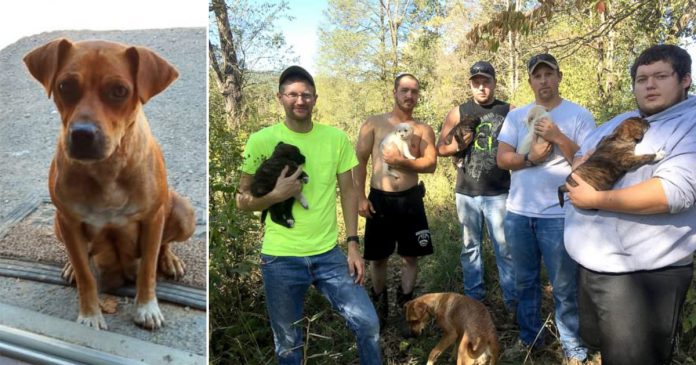 Mitchel Craddock of West Michigan went down into the Tennessee woods for his bachelor party with a group of his best friends. He expected a good, fun time with his buddies, but he never expected by what he would find in the woods.

Craddock says, “The first morning we were there, we had the front door wide open. We’re cooking bacon and we look over the front door to the cabin we’re staying in, and a dog was sitting there, sweet as can be but wouldn’t come inside.”

Annie standing outside their front door.

The guys had no idea where she came from, the area was deserted, but they took a liking to the dog and named her Annie. “She was such a sweet dog, and because of that we thought she’s got to have a home, that she’ll eventually go somewhere else.”

However, it dawned upon them that Annie desperately needed their help because she doesn’t have a collar or a leash. “She was very dehydrated and hungry. She gobbled up everything we gave her as fast as she could,” Craddock added.

Soon, they noticed that Annie would start barking loudly and acting fierce every time any one of them came close to a spot she seems to be guarding.

Sometimes, Annie would disappear for a few hours and came back to them to eat. The guys slowly connected the dots and went to check out the spot, only to realize there was a giant hole in the ground.

One of the shy puppies hiding near the hole in the ground.

“One of my friends went in head first, we found these puppies and we started pulling them out,” Craddock said.

Look how fat their bellies are! All of the puppies look so adorable.

Seven puppies came out one after the other, all clearly in need of medical attention. Craddock humorously recalled, “There was a group of rough men that was supposed to go four-wheeling, but instead they went back inside to wash the puppies.”

Kept in boxes and ready for the ride back to their new home.

They brought all seven puppies—Knox, Bear, Daisy, Gunner, Brimmy, Finn, Rose—including their mother, Annie, home. All of them were treated by a veterinarian and are all healthy now. The best part? Each dog now has a forever home.

Annie and her pups, all of them belongs to a good home now.

After years of therapy, the only thing that saved this autistic...

Adorable sunglasses-wearing husky enjoys an exciting ride on a motorcycle with...