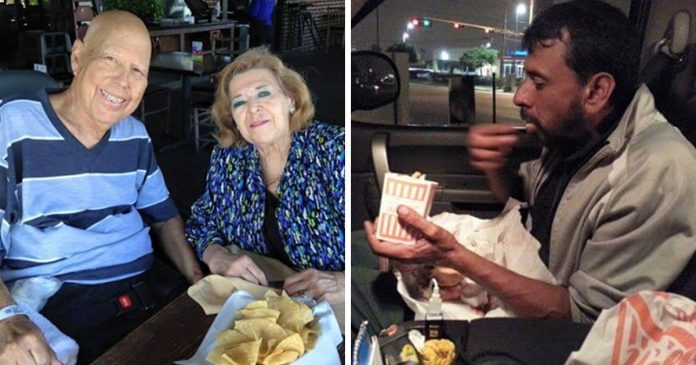 Jimmy Cavazos found it was nearly impossible to fall asleep one night and decided to drive around his properties in Texas and bought a homeless man a meal. While eating, they chatted about each other’s lives and to Cavazos’ surprise, the homeless man started crying when he showed him his father’s photo.

Cavazos got dressed and decided on a whim to take his recently deceased father’s GMC pickup truck. He wanted to drive around Brownsville Olmito and Rancho Viejo to check on his family’s vacant lots and rental properties.

He usually does this routine check 3 to 4 times a week but this was the first time he’s doing it in the dead of night when it was cold, windy and slightly drizzling.

He keeps a laminated prayer card with his father’s photograph in the visor with all of his vehicles and right before starting the engine of the pickup, he pulled the visor down and took out the card. He stared at the image of his father and said “Hi Dad, I’m taking your truck out for a drive tonight, I really miss you….”

He drove past one property after another to make sure everything was alright and when he stumbled across a fresh pile of trash that someone decided to leave in front of the driveways.

He stopped his truck and started loading the trash bags into the rear end of the vehicle. Cavazos noticed someone limping towards him and from a safe distance, the man had called out to him. He asked if he could come close.

The man, who he found out was named Oscar, offered to help him pick up the trash. Oscar’s eyes looked heavy, his clothes were tattered and dirty and his hair was matted but he assured Cavazos that he did not want anything in return as he sincerely wanted to help.

Oscar was homeless and regularly sleeps behind a cement statue of the Virgin Mary on the grounds of a Catholic church nearby.

He accepted his help and once they were done, the homeless man pulled out a wrinkly bag of stale cookies from his pocket and while munching on a few broken bits, offered it to Cavazos to which he politely declined.

After scooping the last bits of trash from the property, Cavazos thanked the homeless man, hopped into his truck and started driving off. He looked at his rearview mirror and saw Oscar walking in the other direction.

It occurred to him that he didn’t even ask if the man was thirsty or hungry so, he drove after him and winded down his window. Oscar was taken aback and asked politely if there was anything wrong, to which Cavazos asked, “Are you hungry?” His face lit up and said “Yes sir! Very much!”

He asked the man to get into the truck but he started to get into the back of the vehicle. Cavazos got out of the truck and told him to get into the front seat and with a little pressure, he did as he was asked. Oscar was afraid that his dirty clothes and smell would be offensive but Cavazos told him not to worry.

He met Oscar, a homeless man who helped him clear trash off of one of the properties, and decided to buy him a meal.

Oscar then said, “I have been walking all day today from a place well outside of Brownsville, where I was taken to work clearing brush and was left there with no food or water by the person who was going to pay me to clean his property. I was there for 3 days and I am very dirty, I don’t think I smell very good, I feel embarrassed and I don’t want to dirty your nice new truck…”

As they drove off to the nearest fast food place, Oscar felt the need to prove that he indeed had been working and showed his dried, bloodied and calloused hands to Cavazos. He said he’d been left working for 3 days for a man who was supposed to return to feed him and bring him water and blankets at an uninhabited ranch outside of Olmito. Unfortunately, the man never returned, never brought him supplies, and never paid him.

The pair arrived at the nearest Whataburger drive-thru and Cavazos ordered a huge meal for Oscar. When he got the order, Oscar asked if he could eat right away and he also asked for a knife.

Cavazos handed him a plastic knife from the dashboard and Oscar cut the burger in half and offered one half to Cavazos. Cavazos was astonished because he never expected Oscar to offer any because he was so hungry.

The biggest surprise that night occurred when the pair were talking about their lives and Cavazos, telling him about his recently deceased father, pulled out the prayer card and showed it to Oscar.

Remarkably, Oscar recognized the man from the photo and said that he had received help from him nearly a decade ago.

He squinted at the picture and gasped as he stared at it wide-eyed and then began to fervently thank God. He exclaimed he knew Cavazos’ father because he’d helped Oscar before. He named the pharmacy at which the father worked in 25 years ago and said he had helped Oscar buy medicine for his little girl who was born with a degenerative disease when he could not afford to buy it himself.

Oscar was on the brink of tears because he could not repay the kindness that was shown to him now since his father had now passed away. Cavazos said that was not true since he had just helped to clear trash from the property his father owned.

Oscar thanked God for the chance meeting and the kindness that has been shown to him.

Filipino lady gets the entire Philippine Airlines flight to herself for...