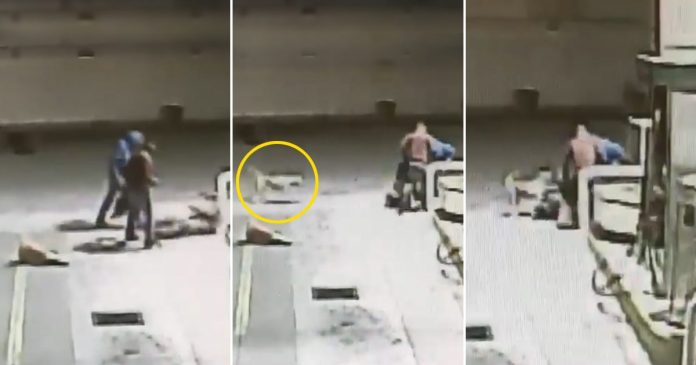 Randy was once a stray dog who wandered around the streets of Tamaulipas in Mexico before the staff at a gas station adopted him. He has never been more grateful ever since.

To repay for their kindness, Randy stays loyal to the staff as he helps them guard the gas station, including rescuing them from an armed robbery.

They adopted him and named him Randy.

In an interview with The Dodo, Gerardo Aguilar, the station’s owner said, “We fed him, bathed him and got him vaccinated. We adopted him.”

“Now he lives here, and is cared for by all the workers,” he further said.

Randy has always been a gentle and friendly dog but little did they realize that he was brave too.

One evening, two armed robbers came to the gas station and forced the attendant on duty to open up the office where they kept the money. The robbers also assaulted the attendant as they punched and knocked him to the ground during the attempted robbery.

Thankfully, Randy who was sleeping in the warehouse heard the commotion and rushed to rescue the attendant from the robbers. Fortunately, both Randy and the attendant were unharmed.

“We were surprised to see how he reacted, and of course we are proud of him,” Aguilar said.

“If it weren’t for Randy, who knows how things would have ended. He shows us how grateful and happy he is with us.”

“It would be wonderful if the culture changed and there were more rescued puppies at other gas stations and other stores. Let’s hope this happens one day.”

Watch how Randy bravely drove the robbers away here

This squirrel keeps tapping the window of this family’s house for...

It may look like a hairless pig or a kangaroo but...