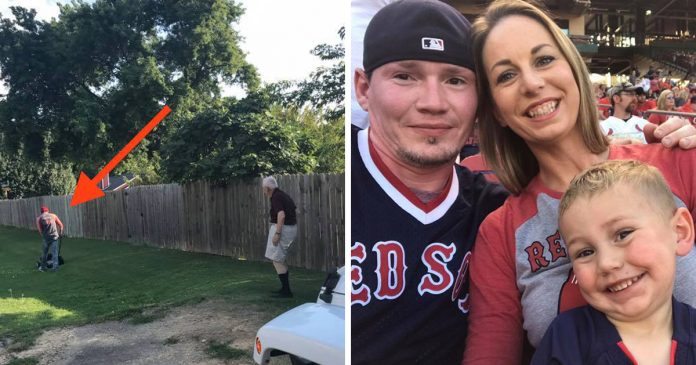 Tara Carter and her husband, Chris were on their way back home from grocery shopping when suddenly Chris pulled over and asked her to take the wheel.

Chris later asked Tara to go back with their son first with the groceries they bought and come back later to pick him up.

Puzzled and surprised by her husband’s request, Tara did not question her husband and did as told.

Just before she drove away, she realized why her husband wanted to pull over and get off.

Not long after her husband got off their car, Tara saw Chris approaching an elderly man who was having quite a difficult time to mow his lawn with a push mower.

Chris then offered to mow the lawn for the elderly man and took the push mower from him.

Tara was extremely touched by her husband’s thoughtful and kind act that she later decided to share what she saw on Facebook.

In her post, she described what happened. “This is one of the many reasons I love my husband. As we are driving home with Kylie and Gage, Chris suddenly turns the jeep around and says ‘Take the food home and come back and get me.'” she wrote.

“I didn’t know what he had seen but said ok. We pull up and Chris takes the push mower from this elderly gentleman,” she continued.

“I pray that my son learns from this and randomly helps people do things like his father does,” Tara concluded her post.

Her post later quickly went viral on Facebook as it received 53,000 likes and 1,600 comments. Many users commented on how great it was to see that there were still people like Chris nowadays.

“Bravo! There are still plenty of good people in the world,” one user wrote.

“What an amazing example of how we all should be!! God bless you Chris for what you did and bless you both for raising your children that way and showing them how grand love is,” another said.

Chris may not have done much for the elderly man but he definitely did his best to help him and also, inspire others to do the same!

Prepare for the waterworks as dad Kenny Thomas dances for his...