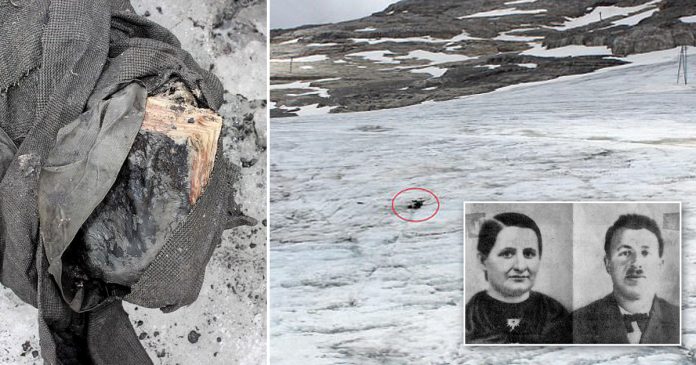 What was supposed to a routine chore of collecting milk from their cows for their family turned into a mysterious disappearance because their bodies could not be found until 75 years later.

The couple who disappeared were Marcelin Dumoulin, 40, and his wife Francine, 37, who left their home to milk cows in the meadows of Chandolin, Switzerland a century ago. They were never seen again by the villagers and their seven children until their bodies reappeared recently in the snow.

The couple said their last goodbye’s to their children on August 15, 1942 when they ventured out to milk their cows in the meadows.

Monique Dumoulin, one of the surviving daughters of the couple, said she and her siblings (Maurice, Raphael, Candide, Eugene, Charles, and Marceline) stayed in their family home for two to three weeks after their parents disappeared.

The oldest sibling Monique, who was only 13 years old at the time, retold the story of how she became increasingly worried and went out to determine if anyone had seen them pass by.

The local priest who was also a family friend assembled a search party and the whole village was involved in helping to look for the couple. They looked for weeks but there was no sign of the couple. The couple’s house was shut off and the children were put into different foster homes.

Marceline Udry-Dumoulin and her sister Monique Gautschy-Dumoulin did not give up hope even when their family was torn apart and the siblings hardly saw each other in the course of growing up.

75 years after the mysterious disappearance, however, the couple’s bodies emerged out of the receding ice. Their bodies were perfectly preserved with all their belongings intact.

The couple’s mummified bodies were found in the Alps along with their identity cards, backpacks and other various belongings

Marcelin and Francine probably slipped and fell into a crevasse which hid their bodies from sight until the ice receded recently. The authorities used DNA samples to formally identify the remains and told the siblings the news once they had clarified that the bodies were, in fact, their missing parents.

They were given a proper funeral which was attended by their remaining close friends and relatives. Their children finally have a sense of closure when they said their final goodbyes as they buried their parents accordingly.

Women are drooling over this student’s 45yo dad—a former pastor turned...