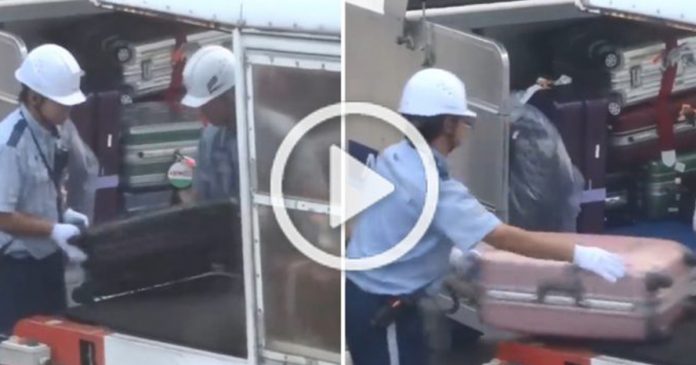 Airport baggage handlers have gained a bad reputation as there have been countless cases of them manhandling their passenger’s luggage. There are many videos out there which show them throwing passenger’s bags recklessly from platforms and conveyor belts to the ground. It has happened so often that most flight passengers already expect that their luggage will be treated as such and they will take extra precautions to minimize the damages.

This is the reason why when a passenger had taken a video of how these Japanese baggage handlers treated their bags, it spread like wildfire!

Scroll down and be sure to watch the video at the end!

A Facebook user known as Nihongo Wakaranai had uploaded the video on February 1 and it featured two Japanese workers transferring passenger’s baggage from a conveyor belt to a carrier vehicle. The video was taken after the aircraft had landed in a Japanese airport.

The user captioned the video “Caught on film at the airport in Japan shows how the Japanese really treat your suitcase…….. often better than yourself.

Since it has been uploaded, the video has been circulating on social media and it has reached up to more than 2.5 million views. The video has also been shared more than 52,000 times.

Even though they deal with thousands of bags everyday, they remain exceptionally professional in handling each bag that comes to them via a conveyor belt with meticulous care.

Many netizens applaud the way these workers handled the heaps of baggage from the flight to the transfer vehicle. Many internet users commented that this should be taken as an example to all flight baggage handlers on how to do perform their jobs in a proper way.

The professionalism displayed by Japanese baggage handlers should definitely be exemplified by other workers of this profession.

Watch the 3-minute clip of the workers below:

Locals were put to shame as two foreigners were spotted cleaning...