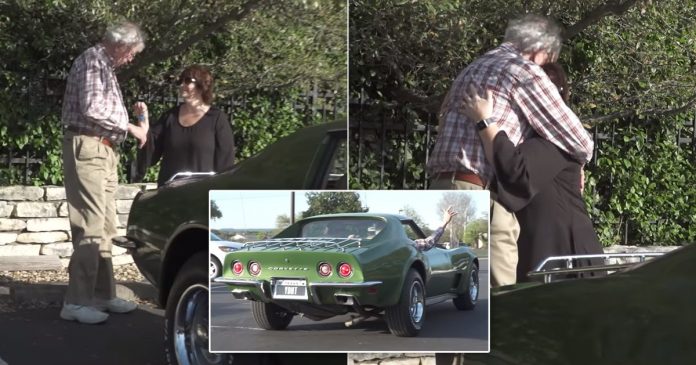 Many parents are willing to do whatever it takes in order for their children to get the best, even when they are not related by blood.

That was what Janis Higgins’ stepfather did before he got married to Janis’s mother in 1976.

A few weeks before he asked for Janis’s mother’s hand in marriage, he sold his beloved green 1973 Corvette Stingray.

The money went to support his new wife and two stepchildren, Janis and her brother.

Janis knew about the sacrifice that her stepfather made to make sure their family had everything they needed and she was touched by his stepfather’s act.

Now, a successful businesswoman, Janis decided to repay what her stepfather sacrificed—the Corvette Stingray. Together with her other family members, Janis planned a wonderful surprise for her unsuspecting stepfather.

In the video that has been attracted almost a million viewers on YouTube, Janis reveals how she presents the surprise to her stepfather.

The father-daughter duo walks side by side to a parking lot after enjoying a family brunch.

As soon as they enter the parking lot, it does not take long before her stepfather spotted a green car parked in a lot not far away from them.

Later, he begins to point out that the green car has the same exact features with his old green Corvette Stingray that he used to own.

The video continues as Janis lets her stepfather takes a closer look at the car before she calls him to the back of the car to look at the license plate.

She then holds up the car key and hands it to her confused stepfather. “What is this,” her stepfather asks as he observes the license plate.

“You didn’t have to,” Janis explains what the “YDHT” means which is written on the license plate.

Obviously, the amazing surprise ends with the two in tears! “I love you, dad,” Janis says as she hugs her stepfather.