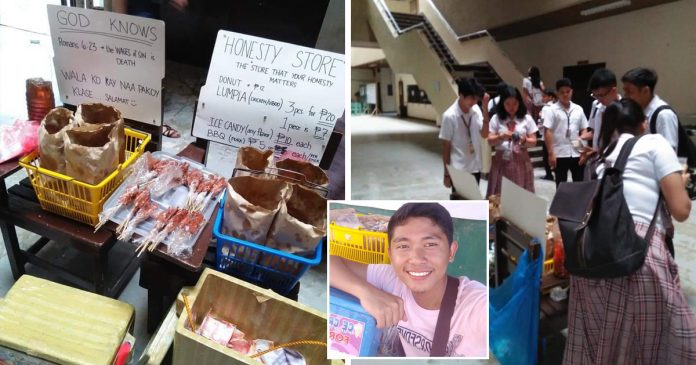 20-year-old Joenel Malanog who is a student at the University of Southeastern Philippine, Davao City used to go around campus to sell food. Unfortunately, his schedule later turned hectic and he had to prioritize classes over his business.

Nevertheless, he was fully aware that he had to help parents earn money to pay for his education which meant that he had to keep selling food on campus.

He knew that there was impossible he could do two things at the same time. Hence, the student came up with an idea to keep his business running.

Malanog later decided to open an “Honesty Store” where he can earn money without him having to attend the food stall all the time.

The food stall which is located inside the campus is attended by none. It operates with the price listed on a cardboard which is placed on a chair so that the customers can pay without having to ask him the price.

The stall fully relies on the customers to pay for the right amount and take a change if needed from the money box.

Even though the food stall which sells lumpia, donut, ice candy, and pork barbecue is unattended, Malanog made sure that his customers stay honest.

He displays a written reminder, “Wala ko kay naa ko’y klase. Salamat.” which translates to “I’m not around because I have classes. Thanks” with an additional reminder “God knows” at the top of the cardboard.

The stall does not only help Malanog to pay for his education but also his four siblings.

Since the food stall started operation, it has attracted attention from many people both on campus and on social media.

The university’s Vice President of Academic Affairs, Shirley Villanueva also expressed her proudness over the success of the “Honesty Stall” as it means the students have integrity.

Putting trust in a lot of people may not be easy but Malanog proves that his idea works!