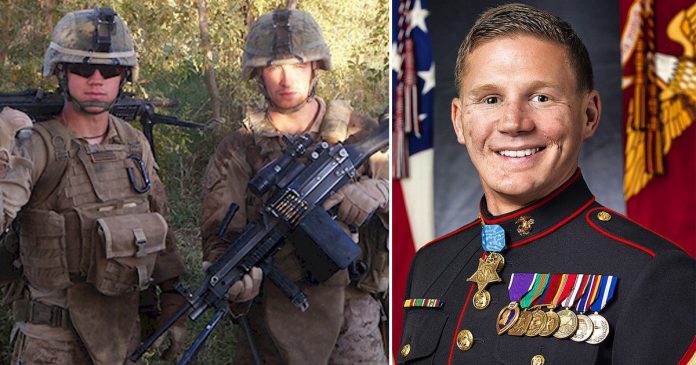 Not many can say that they are fortunate enough to survive a grenade explosion but to Wiliam Kyle Carpenter, he was not looking for admiration and praise. To him, it was a matter of life and death.

William Kyle Carpenter or better known as Kyle was a Lance Corporal in the United States of Marines. He was only 21 when he was deployed to Afghanistan.

On the morning of November 21, 2010, Kyle and his fellow Marine, Lance Corporal Nicholas Eufrazio were tasked with providing security from an observation post.

However, they encountered a surprise attack from the enemy. After a moment of exchanging fire, the enemy later threw three grenades into the area of the observation post where Kyle and Nicholas were manning.

The first and the second grenades fell nowhere near them but unfortunately, the third grenade landed in close proximity to the two Marines.

Realizing that the grenade landed near him and his fellow Marine, William Kyle Carpenter did not waste a single second as he rushed to shield his colleague from the deadly blast.

Thanks to his quick action, his fellow Marine managed to survive.

For Kyle, he sustained injuries in his face, right arm, suffered a collapsed lung, broken bones and he lost his right eye.

At one point, Kyle was even pronounced P.E.A. (Patient Expired On Arrival) which meant that he was technically dead.

In spite of the critical injuries, Kyle survived. He had to undergo multiple surgeries including a brain surgery but the brave Marine stayed optimistic and high-spirited.

To mark for his courageous and loyalty towards the U.S. Marine, Kyle was awarded the Purple Heart, a medal given to soldiers wounded or killed in action.

He also received Medal of Honour which was bestowed by President Barack Obama and is one of the only eight living people to receive the prestigious award.

He was retired from the military and graduated from his degree studies from the University of South Carolina and he was greeted with a standing ovation during the graduation ceremony.

Kyle continues to give back to society by giving motivational speeches and doing charitable acts.

Catch the award ceremony in below news clip:

Scruffy homeless man asked Burger King worker what can he get...