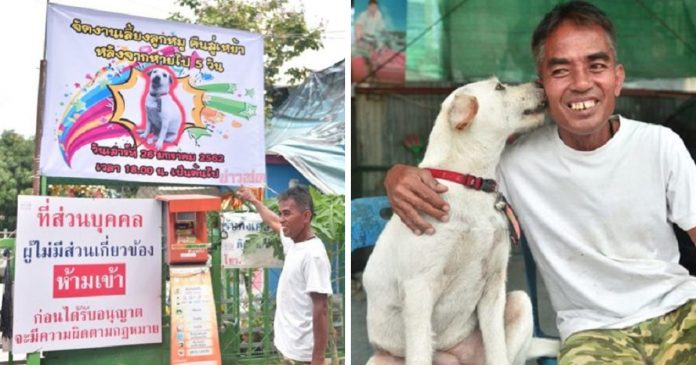 A man in Thailand spared no expense when it came to celebrating the return of his beloved pet dog after it went missing for four days.

Boonsong Meethao, 60, realised that his dog, Lukmoo, ran off on New Year’s Eve after it got scared by the loud fireworks.

Boonsong went looking for Lukmoo the next morning but his search was unsuccessful.

As he could not find Lukmoo, he began to worry that Lukmoo might be starving to death.

“I rode a motorbike to look for her everywhere and couldn’t find her, so I went to pray because I was scared she might starve to death,” Boonsong told Khaosod.

“It might be able to last for just about five days,” he further said.

As Boonsong was worried about Lukmoo, he promised to himself that he would throw a large buffet for Lukmoo if the dog returned home safely in five days.

“I knew that if she went missing for more than five days, she wouldn’t have food and water and could die. So I said if she came back in five days, I’ll throw her a buffet,” Boonsong said to the media.

As he promised, Boonsong decided to throw a special buffet to celebrate the return of Lukmoo on January 26.

He even printed an adorable banner for Lukmoo!

“She’s been back for a while now, but I haven’t had time to plan it until now,” he explained.

“The party will be filled with fellow dog lovers.”

According to Boonsong, he has raised Lukmoo since the dog was born as he took Lukmoo’s mother in as a pet dog.

The dog also likes to eat grilled pork and she is a very gentle dog.

“She’s two years old now. In the day, she’s friendly, but at night, she’s a pretty feisty watchdog,” he said.

Lukmoo is a truly lucky dog!

A dog was found hanging on for dear life from a...