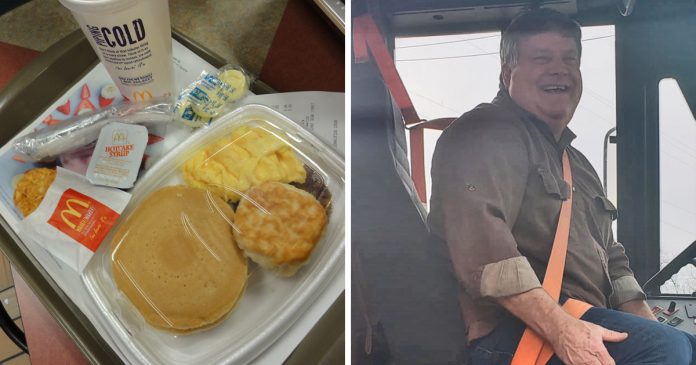 A generous elementary school bus driver in Alabama has been praised for his kindness after he bought school kids 50 McDonald’s breakfasts during an ice storm.

Their school had been delayed for two hours because the roads were icy, so the kind driver, Wayne Price, decided to step in.

His kind act didn’t go unnoticed by Montevallo Elementary School, who quickly shared a photo on Facebook saying he “truly demonstrates the spirit of Christmas!”

“When school was delayed due to icy roads and we weren’t able to serve breakfast, he purchased biscuits from McDonald’s for his entire bus of students!” the caption continues.

That morning, he was buying his own breakfast when he received a text saying all Shelby County Schools were going to be delayed.

So he asked McDonald’s to prepare an extra 50 breakfasts for the kids!

“When it came down to the financial side, it was just second nature. I really did not think about it. I thought, ‘Hey this would be neat. I bet they will like this,’” he added.

And the generous move isn’t his first, apparently! A friend of Wayne’s commented on the photo to tell the world what an amazing man Wayne is.

“Anyone who knows Wayne Price would know that this isn’t a random moment. In the almost 20 years of knowing him, I’ve seen this man give so much of himself to his community.

“I’ve experienced first hand the hope and guidance he brings to people who may not find it anywhere else. I’m glad he’s getting the acknowledgment he deserves,” Derek Wilson wrote.

All the students think he is an incredible man, too!

“I am really thankful for having him as a bus driver, and he feels like a dad to me,” fifth-grader at the school Elizabeth Lopez told ABC.

House in horror: Landlady had the shock of her life when...