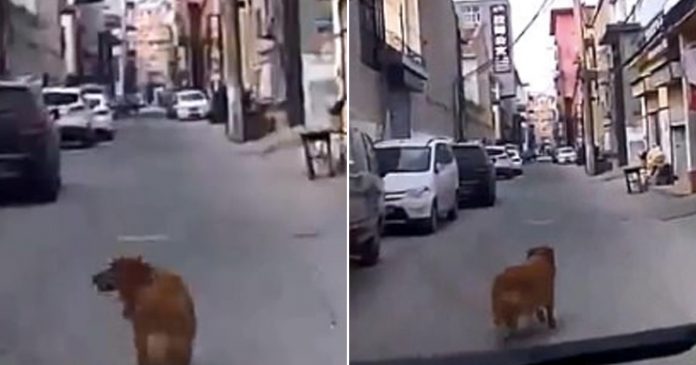 An adorable Golden Retriever has been dubbed a hero for leading an ambulance in north China straight to its unconscious owner, thinking his life was in danger!

The pooch’s owner, a trash collector, had collapsed in an alleyway in China’s Shanxi province while collecting bottles last week before residents called for emergency services.

The heroic dog was clever enough to recognize the ambulance.

Dash cam footage captured the amazing moment he stopped to lead it through the narrow alleyway to his owner.

First, it waited anxiously in the middle of the road for the vehicle to appear—passers-by might have thought he was just blocking the road!

But he suddenly starts to run at full speed, occasionally glancing back at the ambulance drivers to make sure they’re following!

And once the vehicle arrived at the scene, the drivers realized the clever boy had been showing them the way from the very beginning!

He stopped by a large crowd of locals who were surrounding his owner.

Rescuer Jiang Xu, said the loyal dog wouldn’t stop glancing back to make sure they were right behind him.

“After making sure we were following it, the dog then picked up speed and started running,” he said.

Jiang explained that the retriever’s owner had collapsed from drinking alcohol, and they took him to the hospital.

Luckily he’s now being looked after by his son.

We are amazed at how smart the dog was to recognize an ambulance!

The footage has made rounds on social media, and the golden retriever’s actions have made him a viral sensation!

One person wrote on Weibo, “How did the dog recognise an ambulance? That’s just amazing!’

Another commented, “Such a smart and loyal guardian angel!”

His owner is so lucky to have such a sweet and loyal dog!

Watch the hero doggy save his owner in the footage below:

This Loyal Dog Desperately Howled and Scratched at the Coffin of...