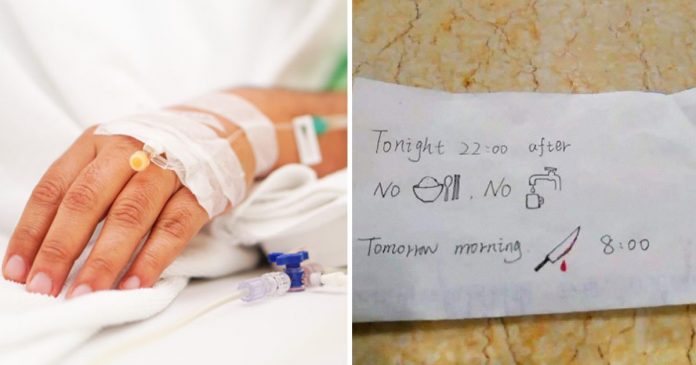 Language barriers can sometimes make communication becomes difficult but that did not stop this Chinese nurse from giving the best treatment to her English-speaking patient.

A popular Reddit post that went viral on social media shows a handwritten note from a nurse in China to her patient who does not speak Mandarin.

The patient who was an international student was admitted to the hospital and was put under the care of a nurse who does not speak English at the hospital.

In spite of the language barriers, the student was moved after the nurse showed her best to make sure the patient followed the doctor’s instruction before undergoing surgery.

Apparently, the nurse left the patient with a note along with several simple drawings to make up for the language barriers between them.

The note which was posted on Reddit by user WaspDog writes “Tonight 22:00 after,” followed by “No” and drawings of a bowl of rice and a cup under running tap to indicate “No drinks”.

The reminder was followed by “Tomorrow morning,” with a knife dripping with blood and the time of the surgery.

The note, albeit was written in simple English definitely told the patient to not eat or drink after 10 pm and that the surgery was scheduled at 8 am the following morning.

Nevertheless, some of the mischievous users shared their playful interpretation of what the note actually meant.

Like this user who likened the drawing of the knife to a murder.

Meanwhile, another user shared a different perspective on what the knife was meant for.

Another user left a comment that the patient would be eaten alive the next morning.

User Ahhr Jhei joined the wagon with another cheeky comment.

These users definitely know how to crack everyone up with their witty comments!

Lucky Man Found a Stunning Medieval Ring in Sherwood Forest that Could Worth Up to US$92,000