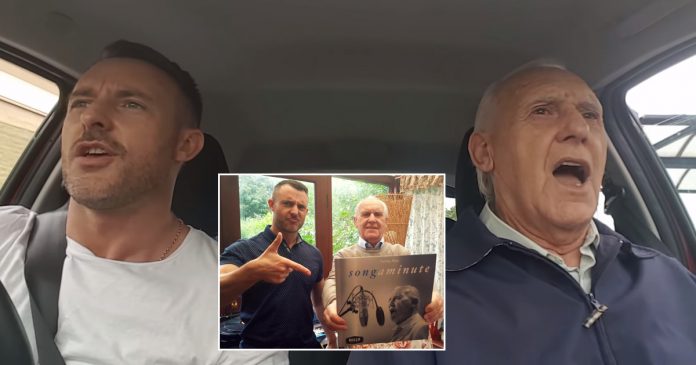 A loving son couldn’t bear to see his dad lose more and more of his memory from Alzheimer’s every day, so he did the sweetest thing to help him cope.

The disease can be exhausting for family members of those affected and affects millions across the globe.

So when Mac Mc Dermott’s dad, Ted, was diagnosed with Alzheimer’s a few years ago, he decided to do everything he could to help him remember the happy moments of his life.

Ted was a singer back in the days and performed at clubs and venues across the country.

But soon family commitments took over his life and he stopped—but Mac said music is still his passion!

“Dad was a singer all his life – he was a Butlin’s Redcoat and then traveled around singing in clubs around the country.

“He worked in a factory after he got married and still did the bit of singing on the side. His nickname is ‘The Songaminute Man’ – simply because of how many songs he knows.

“In the last few years his memory has deteriorated a lot – often not recognizing family and with many aggressive episodes,” Mac explained.

Mac is determined to keep his dad’s spirit alive, so he plays tunes his dad used to sing!

He’s so happy when his father recognizes the songs and sings along!

“Now when we’ve got him singing again he’s back in the room. It’s these moments that we treasure.

The plan is to share as much of Dad’s singing as we can and hopefully help raise money to fund the work of the Alzheimer’s Society – more specifically to go towards paying for a person at the end of the phone line to help other people like us,” Mac said.

Video clips of the father-son duo is so heartwarming—they have such a beautiful bond!

They even plan to create an album together, with 25% of proceeds going towards Alzheimer’s treatment!

Even though life is difficult for the pair, they’re happy as long as they have each other’s support.

A construction worker in China is breaking gender stereotypes as she...

From commoner to royalty—The intriguing life of Empress Michiko was not...