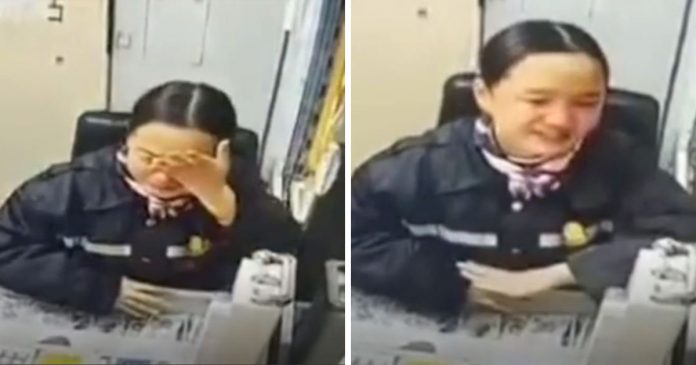 It is certainly never easy to work in the service industry with all the unsparing complaints and criticisms the employees receive on a daily basis and this female toll booth worker knows it better than anyone else.

The video that has made rounds on social media recently shows what a toll booth worker does when she receives backlashes from customers.

At the beginning of the video, the toll booth worker can be seen shedding her tears after being scolded by the customers.

According to MSNews, the worker whose name is unknown was on duty of collecting toll monies from drivers who passed through the tollgate.

On the day of the incident, a car broke down and the worker went to help the driver to move the car out of the way.

However, her kindness was taken for granted by other drivers who were queueing as they had to wait for quite a while before she served them.

The long wait apparently led to the drivers scolding her to the point she was left with tears afterward.

Nevertheless, the video shows the worker maintains her professional attitude as she flashes a warm smile to another driver just seconds after she burst into tears.

The footage which was taken from the surveillance camera inside the toll booth was later shared on social media. It has gone viral on the internet ever since as people expressed their sympathy to the toll booth worker.

Many, too, left encouraging words for her since it is widely known that it is tough working in the customer service line.

One user also reflects on the harshness of the reality of customer service.

Meanwhile, another user offered an opinion that the worker could have called for help for the driver whose car had broken down instead.

Needless to say, many users sympathized the toll booth worker and reminded others that everyone deserves respect and kindness.