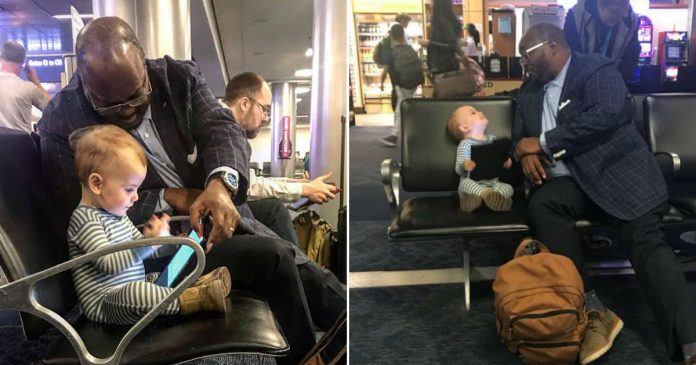 For parents of toddlers and young children, a trip to the airport might turn into a nightmare if the child becomes grumpy.

For author and public speaker Kevin Armentrout, he has prepared for the worst when he was waiting to board the plane with his 16-month-old daughter, Carter Jean.

Thankfully, a kind-hearted fellow passenger lent him a hand as he kept adorable Carter occupied for almost an hour while waiting for boarding time.

In a Facebook post which has gone viral, Kevin shares the heartwarming interaction between his daughter Carter and the friendly sales manager from Oklahoma named Joseph Wright.

“Last night, while waiting to board our plane, [Carter Jean] was being her usual inquisitive self wanting to meet and say ‘hi’ to everyone she could, until she walked up on this man,” he wrote.

“He reached out and asked if she wanted to sit with him. He pulled out his tablet and showed her how to draw with it, they watched cartoons together, and she offered him snacks,” he added.

According to him, Joseph and Carter went on to bond for almost an hour. “This wasn’t a short little exchange, this was 45 minutes,” he wrote.

“Watching them at that moment, I couldn’t help but think, different genders, different races, different generations, and the best of friends. This is the world I want for her,” Kevin wrote.

He also shared that Joseph did not turn away when his little daughter became fussy later on.

“There were a few moments she screamed and tried to get into his work calendar, but he couldn’t care less,” he said to Yahoo Lifestyle.

Kevin hoped that his story would help remind others to be kind to each other. “[This is] what kindness and compassion look like,” as he thanked Joseph and asked him to “continue to shine your light in the world.”

Last night, while waiting to board our plane, @_carterjean_ was being her usual inquisitive self wanting to meet and say…