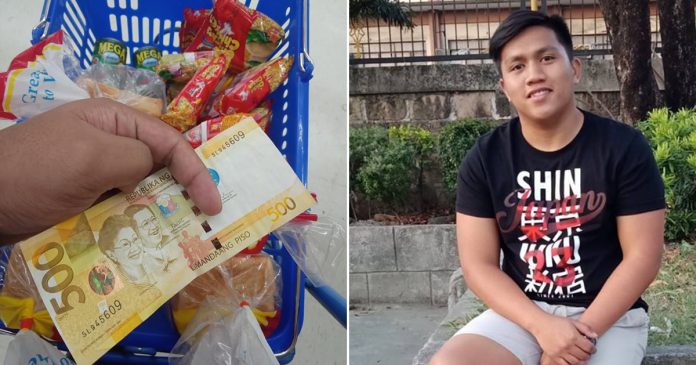 What would you do if you found some cash while walking in the street? For Marvin Tan Juan Pigalan, his first instinct was to return the cash to its rightful owner.

But then, he had a better idea.

The Filipino man was walking on the street when he accidentally found a Php 500 (US$ 9.62).

As soon as he picked the cash, his first instinct told him to return the cash to its owner.

However, Marvin could not find the person who dropped the cash. Nevertheless, a brilliant idea later came across his mind.

Instead of keeping the cash to himself, Marvin decided to use it for a good cause.

With the cash in his hand, Marvin later bought packs of noodles, loaves of bread and cans of sardines.

He also asked the bagger to distribute the goods into separate bags.

Along with some plastic bags containing the noodles, bread and cans of sardines, he later headed back to the street.

He later distributed the food to the homeless person that he met.

[To the owner of the 500 that I found, don’t worry because even though you lost the money, you have helped those people who are in need. I couldn’t find you to return your money, so I did this instead.]

It may not be much but he hoped that at least some homeless people he found that day did not have to worry about food for a few days.

Well, we are sure that his kind act meant a lot to the homeless people he helped that day.