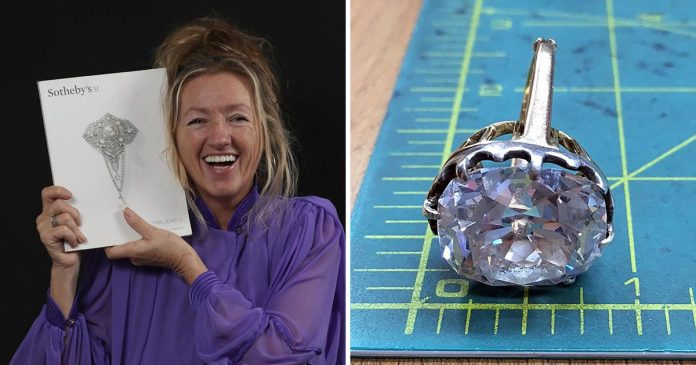 55-year-old Debra Goddard had been keeping a ring that she bought for £10 (US$13) at a boot sale for 33 years before she thought of selling it for some quick cash.

The British woman from Twickenham, West London first thought that the ring she bought 33 years ago in 1986 was plastic.

She never expected that the ring would be valued for almost a million dollar.

According to Goddard, it began when she decided to sell the ring after her mother, June Boyle lost her savings due to a relative’s fraud.

She was only expecting to get £750 (US$970) when she brought the ring to a jeweler for an appraisal.

“When I went to the jeweller, he nearly fainted and said, ‘Do you know what this is? It’s a diamond.’ I sat up all night looking at it, wondering what to do,” Goddard told The Sun.

Goddard added that it may be because of after everything she and her mother had gone through throughout their lives. “It’s karma for the bad things that happened in our lives and my mum being robbed of everything,” she said.

She further said that she had spent most of the money on her mother, June.

According to her, it was because of June’s unfortunate fraud incident that she later decided to sell the diamond ring.

“She’s had holidays in Barbados, seen Tom Jones, seen Celine Dion in Vegas and bought a fur coat. The money isn’t important to me,” Goddard said.

Currently, she is working on a book on how to look for valuable items at boot sales and will donate the money she earns from the book for children’s charity.

She said, “I volunteer with a runaway kids’ charity. If this book makes money, I want it go to them and youth leaders.”