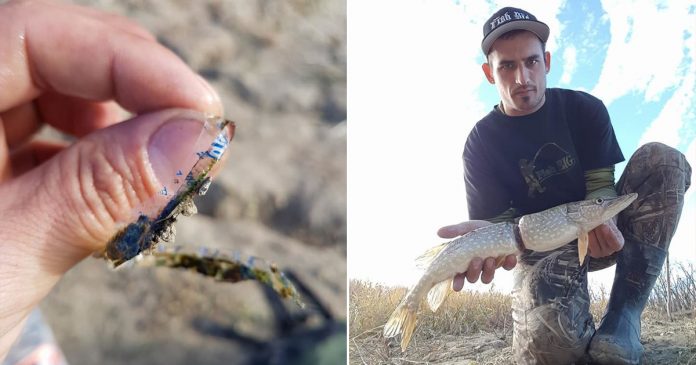 A tiny small plastic wrapping on the street may be harmless but as soon as it gets into the sea, it will certainly become lethal to many aquatic animals.

That was what fisherman Adam Turnbull from Alberta, Canada realised when he went out for fishing in a river near his home.

28-year-old Turnbull has been fishing since he was 11 as he loves to catch-and-release fishing while aiming to leave minimal marks on the fish he catches.

On a Saturday in March, 2017, he went out South Saskatchewan River near Medicine Hat, Alta. where he can regularly be found fishing.

That was when something unusual caught his eyes.

“I thought it had potentially been attacked by another fish,” Turnbull said in an interview with CBC News.

“However, once I picked the fish out of the water I noticed the plastic wrapper wrapped around it, which put me almost straight into shock. I have never seen anything that drastic on a fish before,” he said.

It turned out that the northern pike he pulled out had been caught in bottled drink packaging and it appeared that the fish had been stuck with the plastic for years.

“For me to say that I have never littered in my past would be a lie. I’m sure we all have at some point. But to see the effects, that fish had struggled for years, definitely struck a chord for me,” he said.

Without further ado, Turnbull quickly cut the plastic off.

Unfortunately, years of being caught in the plastic had left severe deformation to its body.

Nevertheless, the fish survived the painful ordeal and seemed to be able to swim as usual after Turnbull released it back into the river.

“As soon as that fish touched the water, it took off like a dart,” he said.

Hoping that his shocking encounter would remind many others to not litter, Turnbull took his story to the social media.

Pick up your garbage. This is a Powerade wrapper which takes up no room in your pocket until you get to a garbage can….

He also had one last reminder for everyone when going out in the public. “I don’t know how many times I am walking the shoreline and I find cans or bottles or minnow tubs or bags that were used to hold worms for fishing.”

“It’s just a real problem. Me personally, I always bring a grocery bag and pick up a few things on the way,” he said.