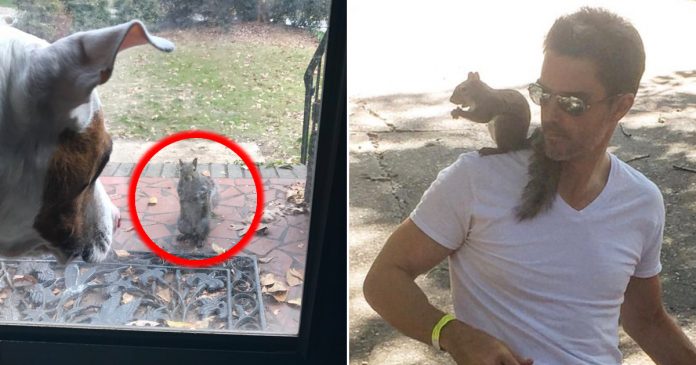 When Brantley Harrison took care of Bella the squirrel back in October 2009, she never knew that their first meeting would forge a friendship that lasts a lifetime.

Their friendship began when Bella was badly injured after being attacked by an owl. She was only a 4-week-old tiny squirrel at that time.

Luckily, a wildlife rescue group managed to rescue Bella and later placed her with Brantley and her family who help rehabilitate injured animals like Bella.

Throughout her stay with the family, they never saw any unusual signs about Bella. The adorable squirrel acted just like the three other squirrels.

Brantley thought that once Bella was released back to the wild, their story would just end there and then. “Her personality was not any different than any other squirrel I have ever raised while she was in my care,” Brantley told The Dodo.

“The main objective is to return them all back into the wild so I never treated her like a pet. She acted no different than the others,” she added.

When the spring finally came, Bella along with Larry, Moe and Curly were released back into the wild. The four squirrels were excited to be back into their habitat but one of them just seemed to not entirely ready to leave Brantley yet.

“She started to come back for a treat or two within days of being released,” Brantley said when she saw Bella coming back only after a few days being released.

Apparently, the squirrel was just not ready to say goodbye to Brantley and her family for good.

That was why Bella kept coming to visit Brantley from time to time just to say hi.

“Bella sits right at the front door waiting for someone to notice she has come by for a visit,” Brantley said.

“She has even resorted to jumping over to the dining room window to peer in for someone to see her.”

While most squirrels often stop coming by, Bella is obviously not one of them.

She has been visiting the family for over ten years and never forgets to come by to say hello almost every day.

A few years ago, Bella injured her foot and Brantley rescued her for the second time. During her stay, she was given antibiotics and was put in her cage to help her recover.

When it was almost time for her to return to the wild, Bella delivered a huge surprise for Brantley and her family!

Just a few days before she was expected to go back into the wild, Bella gave birth to three baby squirrels.

“It was truly amazing to watch the baby I raised raise her own babies,” Brantley said.

With a Single Bullet, a Grandmother Shot and Killed a 4-meter-long...