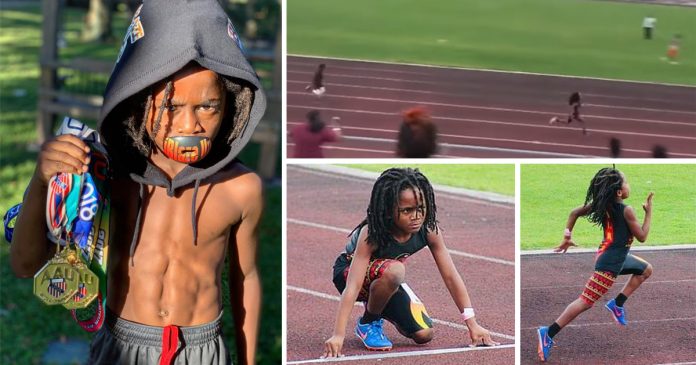 Rudolph ‘Blaze’ Ingram is only seven years old but the young boy already has amazing track records and some people calling him “the next Usain Bolt”!

With more than 300,000 followers on Instagram and great football skills, it is not a surprise that the boy has drawn many household names in the sports industry including LeBron James and the Tampa Bay Buccaneers.

Ingram is already a social media star but his recent return to the track has captured everyone’s attention to him.

In a short video that was taken, young Ingram competed against other runners and amazingly overtook his competitors in just a matter of a few seconds before he sped off to win the race.

He finished with a record-breaking 13.48 in the 100 meters. His latest record on track is believed to be the fastest in the U.S. for his age group.

Thanks to his amazing track records, experts are calling him as “the next Usain Bolt.”

It seems that the boy will be able to achieve the same, if not greater, by the time he reaches Bolt’s age in 25 more years.

Ingram is also a three-time Amateur Athletic Union winner where he stunned people from all over the world by finishing 60 meters in just 8.69 seconds.

While Ingram is doing great on the track, the aspiring youngster has a bigger goal.

On his Instagram bio, he briefly describes his goal as “to get to the NFL” and frankly, the boy is already on the right track.

His father, Ingram Sr is an NFL coach who is very much devoted to making sure that his son never missed any practices, games and training sessions.

Apart from his athletic talents, Ingram also works hard in class as he achieves nothing less than a B for his academic subjects.

Ingram has certainly impressed many people with his incredible achievements both on the track and in class but the boy’s father insisted that it was all thanks to his positive attitude and the countless hours of practices he commits.

“Nobody sees the tree grow. All they see is when it’s big and beautiful. They don’t see it when it’s just a seed—when you’re watering it. You got to stay behind your child and constantly support them and water them. They’ll eventually grow to be something,” Ingram Sr. said.