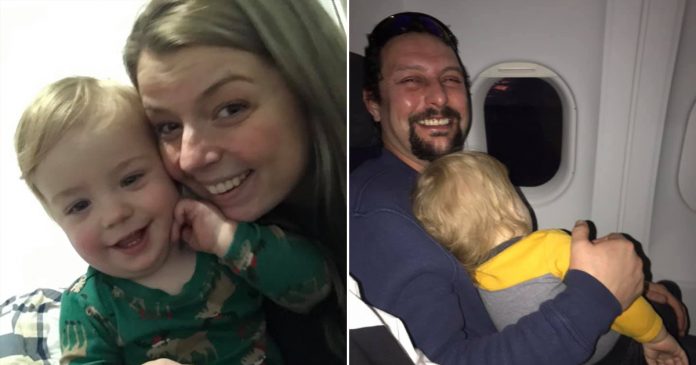 All Jessica Knapp hoped for when she had to fly alone with her one-year-old toddler while five months pregnant was for her son to behave well and sit quietly in his seat most of the time.

Needless to say, she knew that she was asking for too much as it was just impossible for her little boy to stay in his seat throughout the flight. Thankfully, one kindhearted couple who was seated next to her was more than happy to help her out.

In a Facebook post that has touched many readers on the internet, Jessica shared what happened when her active toddler refused to be seated in his seat.

“To the couple in 27A-B. I’ve always seen these stories circling Facebook, but truly didn’t believe this would ever happen to me,” Jessica wrote on Facebook.

“It happened. Yesterday we were flying home, and I was that person on the plane with a 1-year-old cranky baby. Ya know, the one you NEVER want to be seated next to? Yeah, hi there,” she wrote.

As she tried to make sure her toddler remain seated in his seat, she began to worry that other passengers became annoyed with her active son.

Luckily, the couple seated next to her was seasoned parents and they knew exactly how to handle a cranky child.

“Lord must have known I was dreading this last flight, and put me next to these people for a reason,” she continued. “These past 3 weeks were the most stressful time, I was NOT looking forward to flying with a one-year-old again, while five months pregnant, completely alone.”

Apparently, Jessica’s little boy managed to escape from her and later climbed into the arms of Kevin, the man who sat in the window seat.

Rather than being annoyed by the little boy, Kevin straight away entertained him and let the boy settled in his arms.

A moment later, the toddler fell asleep even before the plane had taken off. “But before we even took off, my son was asleep in your arms. A complete stranger’s arms. You see, he’s not one for strangers at all.”

“When he crawled over me while everyone was still boarding to look out the window, you didn’t hesitate to show him all the lights outside, you made him laugh, you made him feel so safe in your arm that he fell asleep!” Jessica continued.

Throughout the flight, Jessica chatted with Kevin and his wife, Lisa. They shared many things from parenting tips to traveling and of course, Jessica was truly grateful for their kindness.

“You made the most dreaded flight become one memory that will last a lifetime.”

“I didn’t catch your last name, and I really would like to say thank you for restoring my faith in humanity just when we needed it most,” Jessica concluded.

Kevin and Lisa might think they did not help much but it meant a lot to Jessica. We definitely need more people like this lovely couple!

?UPDATE! Thank you to the amazing people of Buffalo! With your help, we were able to find Ms. Lisa and Mr. Kevin!!!…

Once struggled in Math, Filipino student now works for NASA as...