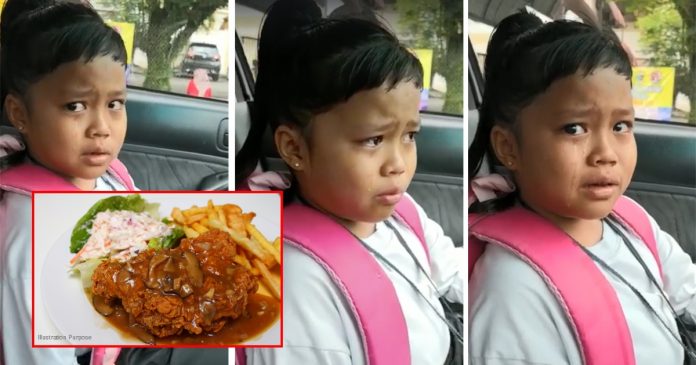 This 7-year-old girl was supposed to spend her school allowance on a colouring book. Instead, the girl spent it on two plates of chicken chop and she has a legit reason for it.

Recently, a video of the young schoolgirl from Malaysia making a tearful confession has gone wildly viral on Facebook.

The girl known as Nur Amira Amani was confessing with tears streaming down her cheeks as her mother asked her why spent the money on chicken chops instead of a book.

Earlier that day, Nur Amira Amani asked her mother for RM15 (US$3.70) to buy a coloring book which her mother later gave her some cash to buy the book.

However, her mother noticed that the young girl came back home without a new coloring book so she asked her daughter about it.

Upon being ‘interrogated’ by her mother, Nur Amira Amani quickly admitted that she had spent all RM15 on two plates of chicken chop.

Plus, she also used the money to buy herself a bowl of noodles and an ice cream during the break.

Her reason was simple.

“It was too delicious,” Nur Amira Amani confessed to her mother.

Her teary confession has amused hundreds of thousands of people as it has garnered over 354,000 views and 979 comments.

While many people were amused by the schoolgirl’s reason, some people shared their desire to eat the chicken chop that made the girl gave in to its deliciousness.

Meanwhile, another user left a funny remark on the video. “I’m hungry just watching this!”

Well, Nur Amira Amani might have broken her promise and we can certainly say that the girl had put the money to good use!

A Young Mother in Russia, who Works for Courier Services, Takes Her Children with Her while She Delivers Food