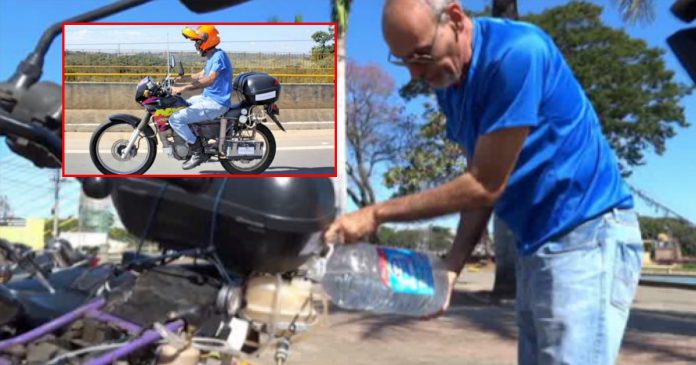 Thanks to his enthusiasm in motorcycles and a little bit of knowledge, public officer Ricardo Azevedo from Sao Paolo, Brazil has created a motorcycle that can run on water!

Called “Motor Power H20″, Azevedo created the innovative creation from his 1993 Honda NX 200 and is able to run on a single liter of water for 300 miles.

The motorcycle uses a car battery to produce electricity. Through the process of electrolysis, the motorcycle can separate hydrogen from water molecules.

“This device breaks apart the water molecules transforming it into oxygen and hydrogen. The hydrogen comes out in larger quantities and then I use this hydrogen to run the motorcycle engine,” Azevedo explained.

He believed that his creation would help reduce air pollution as the motorcycle’s exhaust pipe does not release carbon monoxide but water vapor instead.

“The advantage of this motorcycle, which works with the hydrogen that comes from the water, is that the result that comes of the exhaust is water vapor,” he said.

“This is different from gasoline, the result of which is carbon monoxide.”

Azevedo added that any types of water can be used, whether or not it is clean, drinking water or polluted water.

“To my surprise, the polluted water from the Tietê River worked as much as the clean water.”

As for now, his motorcycle only serves as a prototype but he believed that it could be a hit in the next few years.

“I’ve made contact with the dealership and a qualified mechanic will conduct and assess the tests. I am also willing to explain and demonstrate the system for those who are interested,” he said.