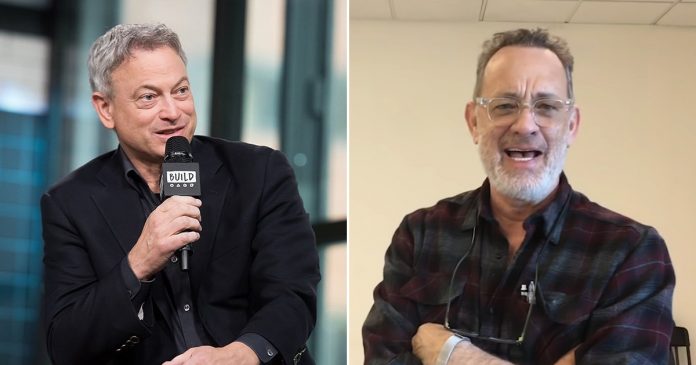 Hollywood actor Gary Sinise has long been a loyal advocate for the United States veterans, soldiers, and their families for over four decades.

He is famous for his philanthropic acts where he often donates money and raises funds worth millions of dollars to the military through his charity organization, The Gary Sinise Foundation.

However, the Emmy and Globe Globe Awards winner never sought after praises for his generous acts.

The actor recently received the surprise video tribute in celebration of his newly-released book, Grateful Americans.

The touching video also included words of gratitude from Ron Howard, “Your commitment, your dedication, you are awesome.”

Meanwhile, Tom Hanks can be heard saying “Thanks, Lieutenant Dan!” with a bright smile at the end of the video.

Apart from famous celebrities, some of the veterans who have benefited from Sinise’s foundation also sent messages to the actor.

One veteran said, “As you can see we’re in front of this beautiful house right now. We wouldn’t have had it were it not for your kindness, graciousness and your wonderful gift of giving.”

Gen. Colin Powell, the U.S. statesman and also a retired four-star general also delivered his gratitude to Sinise. “Thank you for all the things you have done for our men and women who have served our nation,” he said.

“Incredibly touched and grateful by everyone’s support. I’m crying, so choked up, I thought I’d share.”

His generous acts have begun in the early 80s where he showed support for Vietnam veterans while in the 90s, he continued his support by working on behalf of the Disabled American Veterans organizations.

In 2011, he established the Gary Sinise Foundation with a mission to further support the military community in the United States.

“We must do all we can to extend our hand in times of need to those who willingly sacrifice each day to provide that freedom and security. While we can never do enough to show gratitude to our nation’s defenders, we can always do a little more,” he wrote on his foundation website.