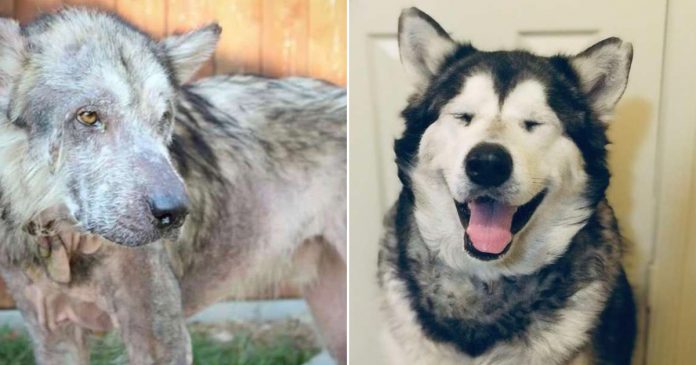 Odin the Alaskan Malamute should have had stunning thick black and white coat like other dogs from the same breed but he looked nothing but sick and dejected.

Thankfully, he now looks as how he is supposed to in the first place; majestic, powerful, healthy and most importantly, happy.

His devastating story began when he was under the care of a pair of breeders who had completely neglected him.

Odin was chained and ignored along with other several dogs under their care and it showed.

He looked terribly unhealthy and ill with his sparse fur and infected skin.

Luckily, he was later rescued by rescuers from Southern Pines Animal Shelter and Southern Cross Animal Rescue of Mississippi and his life slowly changed for the better.

They knew that Odin needed to receive treatment and get into a foster home as quickly as possible. Luckily, his foster mother, Sydney Schelkopf saw him and adopted Odin.

“Poor Odin looked like he was taken straight out from a nightmare,” Schelkopf described the first time when she saw Odin to The Dodo.

“He was emaciated, almost completely hairless, covered in wounds, with cracked and broken teeth, and incredibly weak. He had a putrid smell to him from his horrible skin infections. Basically whatever could be wrong, was with this poor guy!”

According to Schelkopf, Odin had no idea and how to act when he first arrived at his foster home.

“I honestly don’t know if Odin had ever been inside a house before,” Schelkopf said.

The dog looked so confused as if it was the first time he ever tasted freedom as a dog and it broke Schelkopf’s heart.

“He sniffed around the whole house and kept looking back at me like, ‘What’s the catch?’ For weeks after I got him, he would just lay in a spot. I couldn’t get him to play with toys or act like a ‘normal dog.’”

Nevertheless, Odin seemed to know that he was now in good hands that it took only two nights for him to open up and start bonding with Schelkopf.

“The second night I had brought him home, he was brave enough to come to bed with me,” Schelkopf said.

“He climbed onto the bed and just threw his bony body on me, looked up at me with such heartfelt eyes and sighed in such a loving embrace. I knew Odin had finally found where he needed to be.”

Just a few months later, Odin has transformed into a completely different look!

He is now healthy, playful and cheeky Alaskan Malamute! His fur which was once sparse now looks fluffy.

However, he still has to undergo a few treatments as he had been neglected both physically and mentally for quite a while before he was rescued

“He is currently undergoing heartworm treatment which has been a huge battle,” Schelkopf said.

“We have our good days and our bad days. Once all our heartworm treatment is done, we are going to have some corrective surgery on his teeth. Unfortunately, a lot of them are in bad shape, and we are going to do everything we can to get them as best as we can!”

There are no stray dogs in Germany and it’s a heaven...