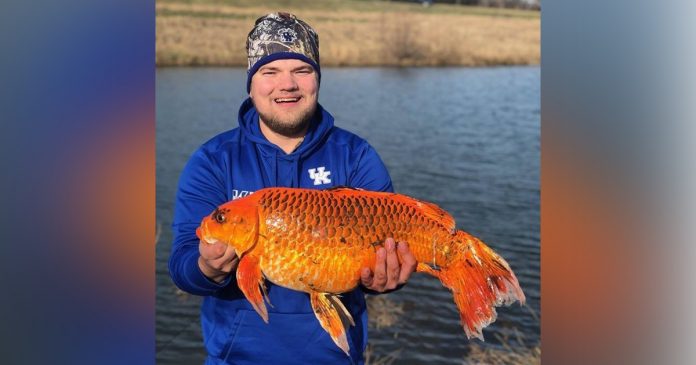 Hunter Anderson and his girlfriend went out on Saturday when they later decided to go fishing at a private pond in Boyle County.

The pond is known to contain unusually gigantic koi fish and goldfish.

While he came with his Cashion rod, Anderson realised that he did not have any bait with him. So, he used a piece of Lee’s Famous Recipe biscuit instead as an alternative bait.

“Believe it or not, we ate at [Lee’s Famous Recipe Chicken] earlier in the day, and I took a piece of a Lee’s biscuit and put it on a hook, threw it out there and that fish ate it,” Anderson told WKYT.

Little did he know that the fish was a large goldfish!

According to the avid fisherman, it took him quite a while to land the goldfish which he estimated to weigh around 20 pounds.

“This fish was different. It was one of the hardest fighting fish I’ve ever fought. It never ever wanted to give up. I’m lucky I got it in. But I did and I was screaming and jumping up and down as I had never seen anything like it,” he said.

Anderson’s sister later shared the photo of him holding the giant goldfish on social media and the post quickly made rounds on the internet.

“What you are witnessing is NOT national geographic! It is not a stolen image or edited photo! This is my brother!! Who is holding what could possibly be…. that pet goldfish we flushed when I was 9!!! …”

What you are witnessing is NOT national geographic! It is not a stolen image or edited photo! This is my brother!! Who…

Still, he released the goldfish back into the pond after capturing the triumphant moment on camera.

“I wanted to make sure it got back to the water safely so maybe a kid can catch it someday and be as happy as I was,” he said.

At first people thought dog is going to eat the fish—what...