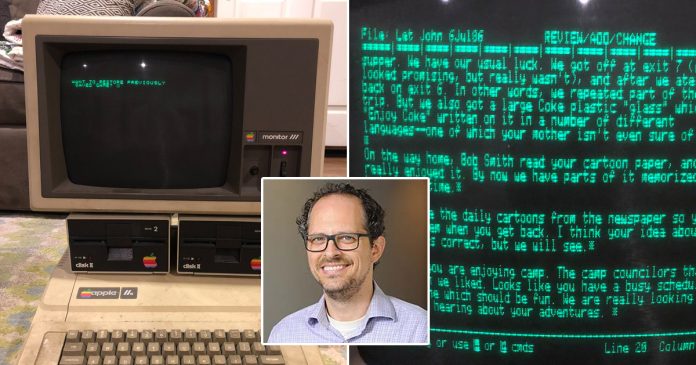 A man found a 30-year-old Apple computer in his parents’ attic and to his surprise, the computer is still fully functional!

John Pfaff, a law professor at Fordham University found the Apple IIe computer when he combed through his parents’ attic.

Curious with the surprising discovery he made, Pfaff later found that the computer was still in working condition. That was when he decided to insert an old game disk and took a nostalgic trip down the memory lane.

The vintage computer asked the man if he wanted to restore the previously saved game, Adventureland and obviously, he went along with it.

An Apple IIe. Sat in my parents’ attic for years. Decades.

Put in an old game disk. Asks if I want to restore a saved game.

According to the man, the discovery made him feel like a 10-year-old kid again.

The game was one of the many classic games he played while exploring the computer. Pfaff also played Millionware, Olympic Decathlon, and Neuromancer.

Wow. So this was an old trivia game I loved (Millionware). This screen gets to the point where it says “Say ‘Hello’ to our contestants Donna.”

And then the disk drive whirs w its little red light.

Then you get “Thank you, Donna.”

Nevertheless, the old games were not his best discovery yet.

Pfaff later found a letter written by his father which he wrote to him in 1986 and saved it on the computer.

I REALLY WONDER what my theory abt the daily newspaper comics Spider-Man was.

My dad passed away almost exactly a year ago. It’s amazing to come across something so “ordinary” from him. pic.twitter.com/Aog3MiSnXN

He was only 11 when his father wrote the letter.

According to Pfaff, the letter was especially special as his father passed away a year ago. The letter contains thoughts that his father had while young Pfaff was in a summer camp.

Pfaff also shared his nostalgic moments on Twitter in which he wrote a series of tweets of his discovery and it quickly went viral on social media.

We never had an Apple, but I lived and breathed DOS in the 80s. This thread is wonderful. Thank you for sharing. Makes me wish I knew where my copy of Where In Time is Carmen Sandiego is. My dad got it for Christmas for me but I don't remember what year, he passed away in 2001.

His tweets regarding the memorabilia have gained over 169,000 likes and 29,563 retweets.

The Apple IIe computer was released in 1983 and it was the third model of Apple II series.